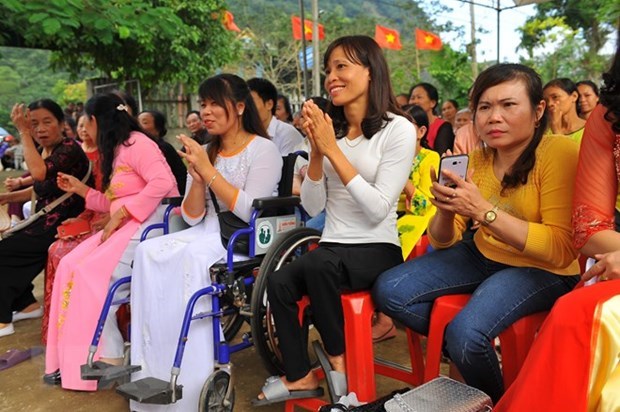 Hanoi (VNA) – A workshop on opportunities, challenges and solutions to promote the participation of people with disabilities in politics was held in Hanoi on April 15.

Co-organised by the United Nations Development Programme (UNDP) in Vietnam and the Centre for Education Promotion and Empowerment of Women ( CEPEW ), the event aimed at enhancing the right to political engagement of people with disabilities in Vietnam where is home to more than 6 million disabled persons.

Speaking at the workshop, Diana Torres , UNDP Assistant Resident Representative in Vietnam, said there will be a political gap between non-disabled and disabled people unless the community joins hands to promote equality and empower people with disabilities on political platforms.

Without their voices in agencies under the National Assembly and People's Councils, the people with disabilities will find it difficult to really integrate into society, she added.

Le Ngoc Hoan, a member of the Blind Association of Lang Son province, who is a self-nominated candidate for the election of deputies to the 15th  National Assembly, said people with disabilities need representative voices in the law-making body so that their legitimate aspirations and needs will be heard.

According to a quick assessment of the group's readiness for political involvement as candidates in the elections of deputies to the National Assembly and all-level People's Councils, 92 percent of people surveyed hoped to have disabled deputies and 63 percent said they are ready for self-nomination to the elections in the next five years.

The assessment, jointly conducted by the UNDP Vietnam and the Norwegian Embassy in Vietnam, was released as part of the workshop.

It showed three challenges facing the group in elections – feeling unconfident in the possibility of success, lacking knowledge on self-nomination and campaigning, and distrusting that the community will vote for people with disabilities.

Jan Wilhelm Grythe, Chargé d’affaires at the Norwegian Embassy, said the Norwegian Government is willing to share information on the political participation process of Tove Linnea Brandvik, a physically disabled Norwegian who served as deputy to the parliament for two terms from 2005 to 2013.

Norway is also willing to organise conversations to inspire Vietnamese people with disabilities, said the diplomat./.

Workshop talks ways to promote participation of disabled persons in political life have 472 words, post on en.vietnamplus.vn at April 15, 2021. This is cached page on VietNam Breaking News. If you want remove this page, please contact us.