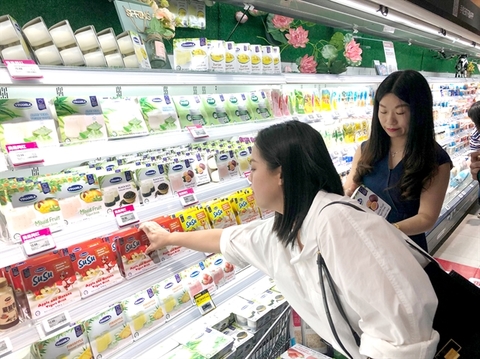 Customers buying Vinamilk products in a supermarket. The company shares posted the biggest loss in market capitalisation on Friday, down over 2 per cent. — Photo vinamilk.com.vn

Shares edged lower on Friday as selling pressure persisted but falls were capped by strong performance of real estate stocks.

The market breadth was still negative as 355 stocks declined while 81 stocks increased during the session. But the market’s liquidity stayed high with nearly 986.9 million shares traded on the southern bourse, worth nearly VND21.8 trillion.

Friday’s losses are expected to extend to next week, according to Saigon – Hanoi Securities JSC (SHS).

The securities firm expected that the index might struggle and fluctuate around 1,250 points in the last trading session of the week. “The close of above or under 1,250 point-level of the index can suggest the trend for next week,” SHS stated in a daily report to customers.

Bao Viet Securities Company said that the VN-Index is expected to test the support territory of 1,225 – 1,232 points again in the next sessions.

Vietnam Dairy Products JSC (Vinamilk, VNM) posted the biggest loss in market capitalisation, down 2.22 per cent. Followed by Vietnam Rubber Group JSC (GVR) and Vietcombank (VCB), down 4.32 per cent and 1.23 per cent, respectively.

However, gains in real estate and construction stocks limited the losses. Of which Vingroup JSC (VIC) still led the rally, up 1.49 per cent on Friday. Other stocks like No Va Land Investment Group Corporation (NVL) and Investment And Industrial Development Corporation (BCM) also rose more than 5 per cent.

During the last session, domestic investors poured over VND3.8 trillion into the market, equivalent to a trading volume of over 225 million shares.

VN-Index loses over 8.5 points, foreign investors keep fleeing market have 577 words, post on bizhub.vn at April 16, 2021. This is cached page on VietNam Breaking News. If you want remove this page, please contact us.