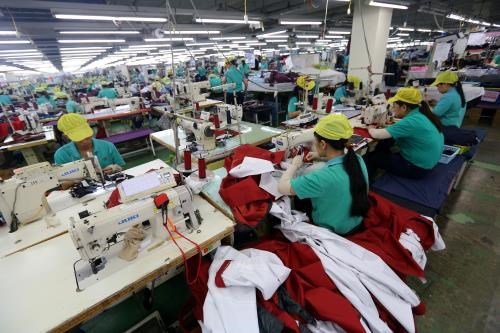 Illustrative image (Photo: VNA)
Hanoi (VNA) – A surge in investments in the Mekong Delta's Vinh Long province is expected to be an opportunity for it to speed up its industrial development in the time to come.

Industrial parks in the province have attracted 69 investment projects to date, including 40 FDI projects, with total capital of nearly 4 trillion VND (173.8 million USD) and 766 million USD.

In 2020, despite the impact of COVID-19, investments in local industrial parks totalled 158 million USD, up 52 percent year-on-year.

Along with the main fields of farm produce processing, food, animal feed production, and footwear, the province also began attracting investment in supporting industries such as the production of automobile spare parts. This conforms with the province's investment attraction orientation of improving capacity in industrial production.

Deputy Director of the provincial Department of Planning and Investment Nguyen Khac Nhu said that besides the efforts of businesses, State support through policies and mechanisms has made an important contribution to raising resources to invest in developing production and business.

Local departments and sectors have actively coordinated with businesses and localities over the years to help businesses deal with any difficulties, with a focus on simplifying administrative procedures.

To improve the quality and effectiveness of foreign investment, it is working to attract strategic investors from potential markets such as Japan, the Republic of Korea, Taiwan (China), Singapore, and the EU.

The RoK now has 18 investment projects worth nearly 90 million USD in Vinh Long, Japan eight worth 102.5 million USD, and Taiwan (China) 11 worth some 239.2 million USD.

The province also targets major projects and those that have high added value and use advanced and environmentally-friendly technology, he said, especially agriculture-based industrial development, high-quality human resources training, and agricultural tourism.

Local authorities will constantly create optimal conditions for investors to access key projects and learn about incentives while helping them tackle obstacles in project implementation, he added.

Vinh Long looks to step up industrial development have 543 words, post on en.vietnamplus.vn at April 20, 2021. This is cached page on VietNam Breaking News. If you want remove this page, please contact us.