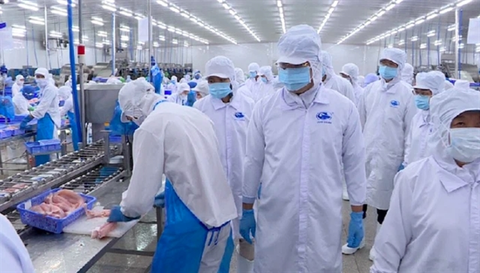 Vinh Hoan Corporation (VHC) posted a loss of 14 per cent in profit after tax despite a gain of 27 per cent in gross profit.

In the quarterly financial report, VHC said that its net revenue increased 9 per cent year-on-year to over VND1.78 trillion in the first quarter. The gross profit also posted a gain of nearly 27 per cent to nearly VND273 billion.

During the period, its revenue from financial activities fell 31.6 per cent against the same period last year to VND37.6 billion, while sales expenses and general and administrative expenses rose sharply.

Of which, sales expenses rose 130.5 per cent year-on-year to VND89.5 billion, and general and administrative expenses were 20 per cent higher than that of last year.

Higher costs led to a fall of 14 per cent in VHC’s profit after tax to VND131 billion in the first quarter.

The company said that the loss was due to higher expenses, which mainly were freight costs.

In a recent report prepared for the 2021 Annual General Meeting, VHC set consolidated revenue of VND8.6 trillion in 2021, up 22 per cent year-on-year, with profit after tax declining 3 per cent to VND700 billion. — VNS

Vinh Hoan's profit falls 14% in Q1 on higher freight costs have 285 words, post on bizhub.vn at April 22, 2021. This is cached page on VietNam Breaking News. If you want remove this page, please contact us.