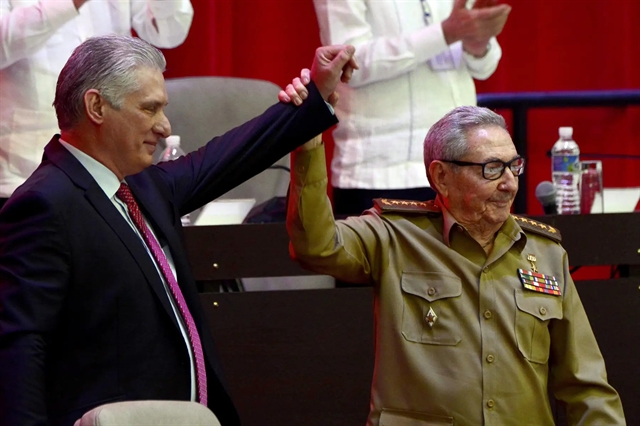 Here is his message in full:

On behalf of the Party, State and people of Việt Nam, I am delighted to extend my greetings and warmest congratulations to you, on the occasion of your election as First Secretary of the PCC Central Committee by the eighth Congress of the PCC.

I am very pleased and warmly congratulate the comrades for your successfully organising the eighth National Congress of the PCC – a great political event continuing the history of the Cuban revolution, thoughts and careers of Fidel and Raul, outstanding representatives of the Centennial Generation. I firmly believe that under the leadership of the PCC led by you, the fraternal Cuban people will overcome difficulties and challenges, successfully implementing policies set by the eighth Congress, thus reaping greater achievements in the process of national construction and defence, for the goal of building socialism in a prosperous and sustainable manner.

On the occasion, once again, I reaffirm wish and determination of the Party, State and people of Việt Nam to further consolidate and deepen special friendship, comprehensive cooperation, loyal solidarity between the two Parties, States and peoples.

Wishing you have good health, happiness and success on your noble position.

Look forward to your visit to Việt Nam soon.”

Also on the occasion, the Vietnamese Party chief sent a letter to Raul Castro, former First Secretary of the Central Committee of the PCC.

In the letter, Trọng said Raul Castro's decision not to run for the election reflects his trust on new Cuban leaders, who will continue writing new pages of history of the Cuban Revolution.

Party leader Trọng described Raul as a close and trustworthy friend and comrade of the Party, State and people of Việt Nam over more than six decades, who has inherited, developed and deepened special friendship, fraternal solidarity, comprehensive cooperation and mutual trust between Việt Nam and Cuba which were fostered by national hero José Martí, leader Fidel Castro and President Hồ Chí Minh.

He reaffirmed the wish and determination of the Party, State and people of Việt Nam to further consolidate and deepen the special friendship between the two Parties and countries.

Trọng wished the Cuban leader good health, happiness and would make valuable contributions to the revolutionary cause of fraternal Cuban people as well as the Việt Nam-Cuba ties. — VNS

Vietnamese Party chief Nguyễn Phú Trọng congratulates new leader of Communist Party of Cuba have 684 words, post on vietnamnews.vn at April 21, 2021. This is cached page on VietNam Breaking News. If you want remove this page, please contact us.