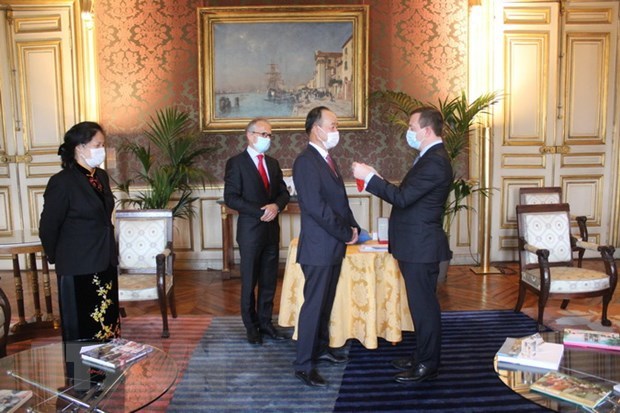 At the ceremony (Photo: VNA)
Paris (VNA) – Vietnamese Ambassador to France Nguyen Thiep was presented the French State's National Order of the Legion of Honour , Class Commandeur, at a ceremony held at the French foreign ministry's headquarters on April 9.

Addressing the event, Bertrand Lortholary, Asia-Oceania Director of the French Ministry for Europe and Foreign Affairs, congratulated Ambassador Thiep and said that by presenting the noble award, France has recognised and honoured the ambassador's efforts during his working term in the country.

He highlighted the development of the Vietnam-France strategic partnership over the past three years, marked by a number of visits by senior leaders of the two countries, especially visits to France by General Secretary Nguyen Phu Trong in March 2018 and then National Assembly Chairwoman Nguyen Thi Kim Ngan in March 2019, and by a visit to Vietnam by then Prime Minister Édouard Philippe in November 2018.

These visits have helped enhance trust and deepen bilateral cooperation in a number of fields, Thiep stressed./.

Vietnamese Ambassador in Paris receives French honour have 275 words, post on en.vietnamplus.vn at April 10, 2021. This is cached page on VietNam Breaking News. If you want remove this page, please contact us.