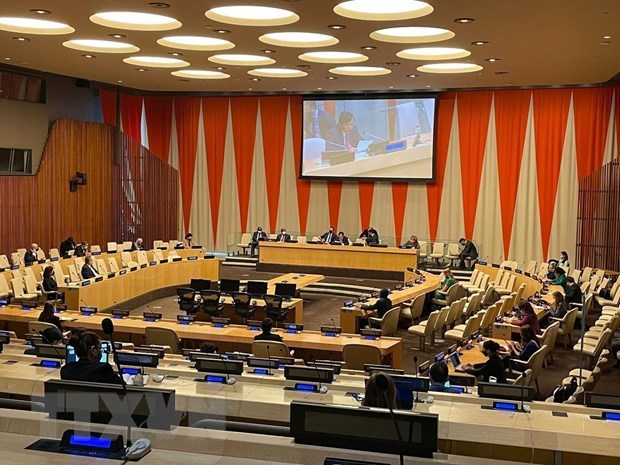 The April 29 meeting to review activities during the Month of Vietnam's UNSC Presidency (Photo: VNA)

This is the second time Vietnam has assumed the role as President of the UNSC during its non-permanent membership of the Council for the 2020-2021 tenure.

The event saw the participation of over 70 representatives from UNSC member states and UN observers.

During the month, Vietnam proposed and chaired four priority events on the role of regional organisations in enhancing confidence-building and dialogue in conflict prevention and resolution, mine action, protection of objects indispensable to the survival of the civilian population, and sexual violence in conflict. These topics all put people at the centre and aimed to build and maintain sustainable peace. Along with these events, Vietnam hosted the drafting of and promoted the adoption of three documents of the Council, including two presidential statements and one resolution.

The most important initiative of Vietnam was the High-level Open Debate on “Cooperation between the UN and regional organisations in enhancing confidence-building and dialogue in conflict prevention and resolution".

This was the first time the President of Vietnam presided over a meeting of the UNSC and also the first important multilateral diplomatic activity of President Nguyen Xuan Phuc since the 13th National Party Congress . After the event, the Council's member countries approved a presidential statement proposed by Vietnam on this topic.

The debates on mine action and protection of objects indispensable to the survival of the civilian population, chaired by Foreign Minister Bui Thanh Son, received attention and appreciation from UN member states. This was clearly reflected in the co-sponsorship of 65 UN member countries and the voting in favour of all 15 UNSC members for a resolution drafted by Vietnam. Resolution 2537 emphasises the importance of complying with international humanitarian law and ensuring humanitarian aid, especially in the context of the ongoing COVID-19 pandemic. The UNSC also approved the first presidential statement proposed by Vietnam on overcoming the consequences of bombs and mines. The debate on sexual violence in conflict was also welcomed by many UN member countries.

In addition, in the month of Vietnam's Presidency, the UNSC responded promptly to emerging issues that threatens international peace and security, including those in Syria, Palestine, Yemen, Mali, the Great Lakes, West Sahara, Sudan, Somalia, Libya, Abyei Area, Ethiopia, Kosovo, Colombia and Myanmar. Vietnam responded to all the initiatives and proposals of other countries and applied creatively the rules and practices of the UNSC, while promoting consultations and consensus-building for the Council to make timely decisions.

As the UNSC President, Vietnam has promoted the broadest possible participation in UNSC activities through the organisation of meetings and discussions with the UN Secretary-General, in-person meetings among UNSC member states, international press conferences, and many events informing UNSC activities to UN member and observer states, non-governmental organisations, and others.

During the month Vietnam acted as the UNSC President, as of April 29, the Council held 27 official activities, including five open debates, eight meetings to listen to reports, two others to vote on resolutions, and seven to negotiate resolutions. It adopted 12 decisions, including four resolutions and two presidential statements, along with five press statements and one press release.

The UNSC continues its activities on April 30.

At the review meeting, representatives of UN member states highly valued Vietnam's priority activities, especially its promotion of the UNSC's attention to the aspect of humanitarian assistance and civilian protection.

They congratulated Vietnam on successfully fulfilling the duties of the Council President in April, noting that the country smoothly chaired UNSC activities and managed to promote the Council's consensus and UN member states' participation and contributions./.

Vietnam convenes meeting to review Month of UNSC Presidency have 800 words, post on en.vietnamplus.vn at April 30, 2021. This is cached page on VietNam Breaking News. If you want remove this page, please contact us.