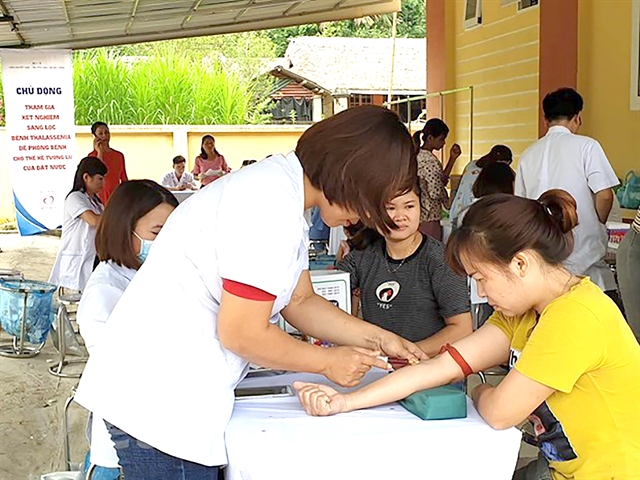 HÀ NỘI — Việt Nam is marking International Thalassemia Day on May 8 with a message calling on people to conduct pre-marriage counselling and health check-ups, the General Office for Population and Family Planning said on Monday.

This year's International Thalassemia Day, themed ‘Addressing Health Inequalities Across the Global Thalassemia Community’, is devoted to raising public awareness about thalassemia and one of the major causes in the spread of the disease – cousin marriages, as well as the importance of pre-marriage and pre-pregnancy counselling and screenings to detect the disease.

Data shows that there are about 8,000 babies born carrying the thalassemia gene every year in Việt Nam, about 2,000 of which will suffer from severe symptoms.

Some 13 million Vietnamese, or 13 per cent of the population, carry the gene. About 20-40 per cent of the thalassemia gene carriers are mountainous ethnic minority people, mainly due to inbreeding.

According to the General Office for Population and Family Planning, despite many efforts, treatment can only help improve patients' quality of life and does not completely cure the disease.

A report shows that since 2001, up to 20 per cent of children born with thalassemia died at the age of 6-7 and most people with severe symptoms cannot find a spouse.

People with severe symptoms may suffer from bone problems and liver and heart failure, and the condition can be fatal.

A child can inherit thalassemia if one or both of their parents carry the mutant gene. The risk is higher if both parents have it.

Most married Vietnamese couples do not have any tests or consultancy on inherited disorders. People who carry such genes often show no abnormal signs so do not undergo examinations or screening before giving birth.

Huge investment in medicine and regular blood transfusions make thalassemia a costly disease, placing a financial burden on families and society as a whole.

It is estimated that VNĐ2 trillion (US$85.1 million) and 500,000 blood units are needed each year to treat thalassemia patients in Việt Nam. The average treatment cost for a severe case from birth to the age of 30 is about VNĐ3 billion ($130,000). — VNS

Viet Nam raises awareness about thalassemia have 510 words, post on vietnamnews.vn at April 14, 2021. This is cached page on VietNam Breaking News. If you want remove this page, please contact us.