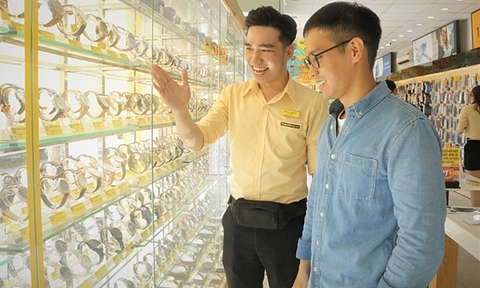 Shares extended gains on Tuesday thanks to the outperformance of some individual large-cap stocks.

The market breadth was negative as 187 stocks gained while 227 stocks decreased during the session. The market’s liquidity stayed high with over 843.6 million shares traded on the southern bourse, worth VND23.1 trillion (US$1 billion).

"VN-Index remained in green for most of the session and is currently close to the threshold of 1,270," said BIDV Securities Co.

"On the market, investment cash flow decreased slightly. Meanwhile, foreign investors were net sellers on both HoSE and HNX.

"Besides, market breadth turned to equilibrium with increased liquidity compared to the previous session.

"According to current assessments, the VN-Index is likely to consolidate in the 1,260-1,280 zone in the next sessions," it said.

Nearly 160.4 million shares were traded on the northern exchange, worth VND3 trillion. — VNS

Shares rally on the rise of large-caps have 434 words, post on bizhub.vn at April 21, 2021. This is cached page on VietNam Breaking News. If you want remove this page, please contact us.