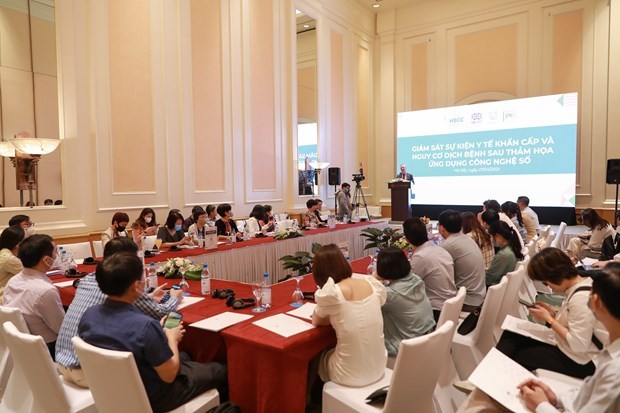 UK Ambassador to Vietnam Gareth Ward speaks at the event (Photo: VNA)
Hanoi (VNA) – A workshop held in Hanoi on April 28 highlighted the important role of the private sector and digital technology in public health emergency response and monitoring.

After global disease outbreaks in the past, 196 countries, including Vietnam, agreed to comply with the International Health Regulations 2005 to develop the capacity of collecting and analysing health information so as to make early warnings and response to public health events.

Event-based surveillance (EBS), one of two methods for monitoring communicable diseases, aims to quickly detect any public health events that run the risk of causing disease transmission and outbreaks or affecting public health, and to issue a timely and appropriate response, thus minimising any negative impact on the public.

EBS is conducted by collecting information from three main sources: the community, healthcare establishments or testing labs, and the media (press, social networks).

Nguyen Thi Huong, an official from the Ministry of Health's General Department of Preventive Medicine, pointed out the low participation of private health establishments in public health surveillance and reporting, even though the sector is potentially a major source of input information for EBS.

Since 2020, based on the success of involving the private healthcare system in screening and reporting non-communicable diseases, malaria, tuberculosis, and HIV, Population Services International (PSI) Vietnam has applied chatbots, via which private healthcare facilities report suspected COVID-19 cases and infectious diseases that may turn into outbreaks.

The application has received financial support from the UK Department for International Development, the Unilever group, and the World Health Organisation in Vietnam.

PSI Vietnam has carried out a project on engaging the private sector in public health emergency response in Hanoi and the provinces of Bac Ninh, Thai Nguyen, Ha Nam, and Quang Binh. The project has applied technological solutions to optimise efficiency and increase the timeliness of the EBS system.

After six months, it has provided training on the system to nearly 3,100 pharmacies and clinics. More than 81,900 cases with suspected symptoms have been reported via the system, becoming a source of supplementary data for the early detection and zoning of disease hotspots.

Underlining the importance of engaging the private healthcare sector in EBS, UK Ambassador to Vietnam Gareth Ward said close cooperation between the Government, international organisations, and private healthcare establishments can help boost the application of scientific initiatives so as to secure the public's health and safety and sustainable development./.

Private sector important to public health emergency response: Workshop have 582 words, post on en.vietnamplus.vn at April 28, 2021. This is cached page on VietNam Breaking News. If you want remove this page, please contact us.