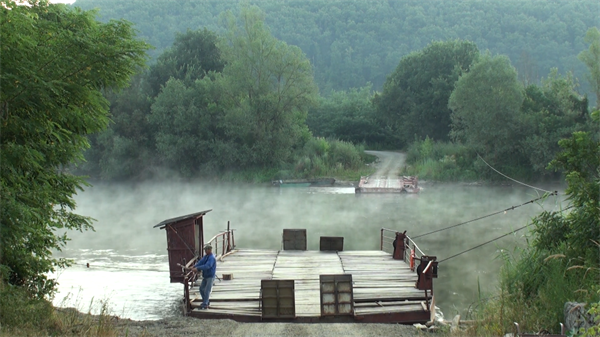 The film Ferry Tale (Nguyễn Hồng Quân và Michal Shanny, 2017) will be screened on April 14. — Photo courtesy of the organisers

HCM CITY — A series of Vietnamese films, including contemporary short films, animations, and documentaries are being screened in HCM City from April 11 to 18 under the Like the Moon in a Night Sky 2021 project.

The films thematic categories include Eternal Sadness, And So It Was, Another Life, The Month of May, The Faces in Time, and Two Worlds.

The programme kicked off on Sunday with five contemporary short films made by renowned and emerging Vietnamese filmmakers, with each film lasting 14 to 18 minutes.

Two films, Tháng Năm, Những Gương Mặt (The Month of May, Faces in Time) and Chung Cư (The Apartment Building) by Đặng Nhật Minh and Việt Linh will be shown on April 15, and many other films, including Hai Thế Giới (Two Worlds), will be screened until April 18.

Made in 1953 by the then Paris-based Phạm Văn Nhận, Two Worlds opens a window into the Vietnamese community in France during the times of the Indochina wars. The film was digitised and restored by Cinémathèque Française, premiering in 2014.

KI}{INEMA curatorial group and directed by emerging filmmakers Đào Thu Uyên and Cao Việt Hoài Sơn, the project and the acts of intimacy it centres on enters a public space in today’s COVID-19 world.

Like the Moon in a Night Sky 2021 is co-organised by TPD and COLAB Vietnam, with support from the British Council Vietnam, Vietnam Film Institute, Hoa Sen University, Dcine Cinemas, XineHouse and many other organisations and individuals based in HCM City and Hà Nội.

Initiated in 2020 by the TPD Centre for the Development of Movie Talents, the project includes a series of events about Vietnamese cinema, past, present and future. VNS

Like the Moon in a Night Sky 2021 film project showcases shorts, animations, and documentaries have 617 words, post on vietnamnews.vn at April 13, 2021. This is cached page on VietNam Breaking News. If you want remove this page, please contact us.