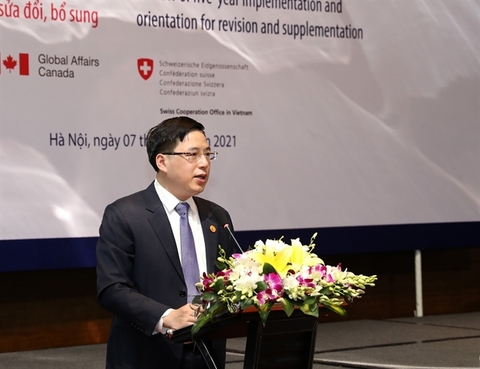 Dang Quyet Tien, director of the Department of Corporate Finance from the Ministry of Finance mentions shortcomings in the current law on the investment of State capital in production and business in enterprises. — VNA/VNS Photo Pham Hau

The law on managing the use of State capital invested in an enterprise’s manufacturing has revealed shortcomings, according to the Ministry of Finance (MoF).

Dang Quyet Tien, director of the Department of Corporate Finance from the MoF, told a workshop held between the ministry and the World Bank (WB) in Ha Noi on Wednesday that: "The Law No 69/2014/QH13 created a legal corridor for the investment of State capital in production and business in enterprises with incentive mechanisms and policies that have improved the country’s investment, however, there are still shortcomings seen over the past five years."

Tien mentioned some problems, including different understandings on State investment in enterprises and a lack of clarity on the matter in related laws, which lead to difficulties in implementation.

"It is necessary to collect comments, analyse and propose amendments and supplements to the law to continue to improve policies accordingly,” he said.

Proposing the content to be revised, PhD Le Dang Doanh said the new law should define the scope of the State’s investment and the field of equitisation.

"Equitisation should be done carefully with strategic shareholders in the board of directors, improving corporate governance quality and solving land-related problems in equitisation,” Doanh said.

"State-owned enterprises (SOEs) management needs to be reformed according to market principles,” he added.

He said the State should still manage and supervise its capital but also avoid too much administrative intervention and human resource intervention in enterprises, adding there was a need for transparency in SOEs management according to international standards.

Nguyen Thuong Lang from the National Economics University suggested the revised law should comply with market principles where the capital investment efficiency of State shareholders must be evaluated based on the added value of invested capital and dividends and distributed profits annually.

Economic expert Nguyen Dinh Cung, former director of the Central Institute for Economic Management (CIEM), said: "In the amendment of regulations, it is necessary to clearly state the responsibilities, rights and powers related to corporate governance."

Experts said the amended law needed to clarify the role of the agency representing the owner, all activities of the enterprise must be performed by the executive board, separating the management functions of the State owner and at the same time it is necessary to concretise the accountability of the head and apply modern governance according to international practices. — VNS

Law on management of State capital in enterprises should be changed: experts have 553 words, post on bizhub.vn at April 9, 2021. This is cached page on VietNam Breaking News. If you want remove this page, please contact us.