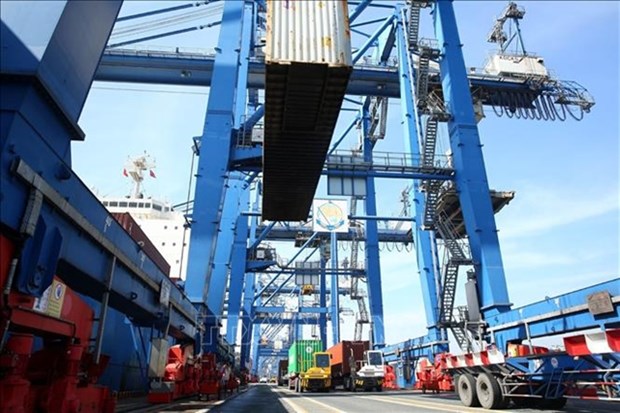 Containers being loaded at Cát Lái Port in HCM City. The Department of Transport has asked the city to give priority to six key transport projects to clear congestion on roads leading to ports. — VNA/VNS Photo

HCM CITY — The HCM City Department of Transport has asked the city government to give priority in the next five years to six key transport projects worth VNĐ27.488 trillion (US$1.19 billion) in order to clear congestion on roads leading to ports, especially Cát Lái Port in District 2.

Under the public investment plan for the 2021-2025 period, of the six projects, three are being developed, including the Mỹ Thủy intersection project and the other two under the Ring Road 2 project.

The other two include a project to build the eastern belt route from Phú Mỹ bridge to Mỹ Thủy intersection (in Thủ Đức new City), with an investment of more than VNĐ1.2 trillion.

These newly proposed projects will improve the connection between the Hiệp Phước Port in Nhà Bè District and Cát Lái Port in District 2.

The department said the city should consider suspending or extending completion of projects that have been approved for 2016-2020 period but are not urgent.

Trần Quang Lâm, director of the Department of Transport, said it was important to address the traffic jams on roads leading to Cát Lái Port in District 2, especially Nguyễn Thị Định Street and the Mỹ Thủy intersection.

Dr Nguyễn Bá Hoàng, vice rector of the HCM City University of Transport, said that rail and water transport connected to the ports should be developed to increase the capacity of freight transport and reduce costs.

It is also vital to close the ring road system and build dedicated railways to Cái Mép and Cát Lái ports.

In a related matter, the city will continue to move its ports to city outskirts to ease congestion on roads as well as build new ones under a national port master plan for 2020-2030.

Cát Lái Port, situated in the eastern gateway, has long been a traffic congestion hotspot with an average of 16,000-17,000 trucks making trips to it daily.

According to the city Maritime Port Administration, between 19,000 and 20,000 trucks each day enter and leave Cát Lái Port through Võ Chí Công, Nguyễn Thị Định and Đồng Văn Cống roads.

There are times when 26,000 vehicles are going in and out the port a day, causing traffic jams in the port area. — VNS

Key projects to clear congestion on roads leading to ports in HCM City have 754 words, post on vietnamnews.vn at April 19, 2021. This is cached page on VietNam Breaking News. If you want remove this page, please contact us.