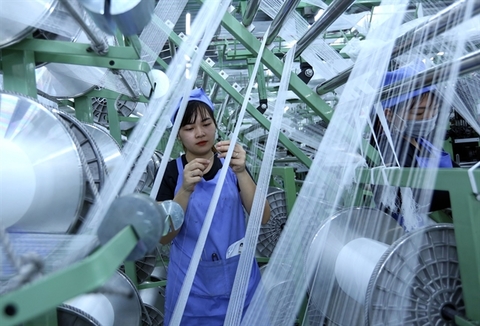 Several of Viet Nam's key export sectors, such as textile-garment, leather-footwear, and electronics have become magnets for merger and acquisition (M&As) activities, posing a risk of leading enterprises in those sectors being purchased by foreign investors.

An advantage of Viet Nam's textile-garment industry is low labour costs, and it was also identified as one of six sectors on a list of supporting industry products prioritised for development.

The country has become the "footwear factory" of the world, while the domestic market boasts a population of more than 96 million.

Viet Nam is also establishing itself as the world's electronic manufacturing hub, with FDI continuing to flow into the sector over recent years.

Tran Phuong Lan, an official from the Viet Nam Competition and Consumer Authority at the Ministry of Industry and Trade (MoIT), said that apart from existing development potential, opportunities created by bilateral and multilateral free trade agreements (FTAs) have also fuelled those industries' development.

For example, she noted, under the EU-Vietnam FTA (EVFTA) that took effect on August 1, 2020, 42.5 per cent of import tariffs on textile-garment products were immediately eliminated, while those on leather-footwear items will be gradually cut to zero per cent. The Comprehensive and Progressive Agreement for Trans-Pacific Partnership (CPTPP), which came into force on December 30, 2018, abolished tariffs on Viet Nam's textile-garment products exported to other member countries.

A recent study of COVID-19's impact on certain main industries in Viet Nam noted that there have been signs of M&As surging in the textile-garment, footwear, and electronics sectors over the last three years.

In 2018, Japan's Itochu Corporation spent US$47 million on purchasing nearly 10 per cent of shares in the Viet Nam National Textile and Garment Group (Vinatex), raising its stake to almost 15 per cent and becoming the second-largest shareholder, after MoIT.

Investors from the Republic of Korea, who have continually conducted large-scale M&A deals in Viet Nam, also tend to select sectors with potential, like textile-garment, leather-footwear, and electronics.

Economic experts cited the experience of other countries as showing that to ensure effective M&A activities and protect the interests of all sides involved, it is necessary to perfect related legal regulations, especially those on information transparency, and set up a regular consultative mechanism between the MoIT and the Ministry of Planning and Investment to develop an M&A database for key industries like textile-garment, leather-footwear, and electronics.

In particular, experts noted, in M&As involving foreign firms, businesses should have a good grasp of market information and carefully assess foreign investors regardless of the deal's value.

Nguyen Thi Tong, former Vice Chairwoman and former Secretary-General of the Viet Nam Leather, Footwear and Handbag Association, recommended that as the leather-footwear and handbag sector is one of Viet Nam's five key export industries, businesses should make proactive moves to boost their capacity and co-operation via M&As within their sector, to secure sustainable development. — VNS

Key export sectors the target of M&As by foreign investors have 705 words, post on bizhub.vn at April 16, 2021. This is cached page on VietNam Breaking News. If you want remove this page, please contact us.