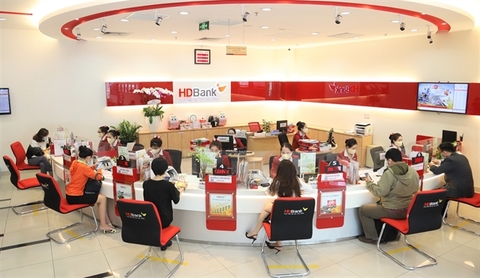 HDBank enjoys high growth in Q1, with pre-tax profit rose by 68 per cent year-on-year to over VND2.1 trillion (US$91.05 million). — Photo courtesy of the bank

The Ho Chi Minh City Development Joint Stock Commercial Bank (HDBank – ticker symbol: HDB) has released its financial statement for the first quarter of the year, which shows pre-tax profit rose by 68 per cent year-on-year to over VND2.1 trillion (US$91.05 million).

Income from services was up by more than 98 per cent, indicating its great growth potential.

Return on equity and return on assets were 26.3 per cent and 2.1 per cent.

Asset quality, capital adequacy ratio (CAR) and liquidity were maintained at high levels, with CAR (according to Basel II) at over 12 per cent.

The ratio of short-term funds used for medium and long-term loans was 23.4 per cent as against a maximum of 40 per cent prescribed by the State Bank of Vietnam.

Cost management efficiency continued to improve, with the cost to income ratio at 39.1 per cent compared to 51 per cent a year earlier.

Outstanding loans were VND198 trillion ($8.5 billion), up 5.2 per cent for the year, with growth coming from all core segments like retail, small and medium-sized enterprises and consumer finance.

As it walks hand in hand with customers to achieve the dual goal of fighting the pandemic and also keeping the economy ticking, HDBank has offered preferential programmes to support individuals and enterprises at interest rates starting at a mere 3 per cent per annum.

Together with high credit growth, it also achieved a major breakthrough in banking services.

The net service income in the first quarter surged by over 98 per cent from a year earlier, the third straight quarter of impressive growth, indicating the huge potential for development of the services segment.

Bancassurance is another promising area of development, and many international life insurance companies are keen to ink exclusive agreements with it.

Credit cards and other products also have high development potential in 2021 and the following years.

HDBank has spent tens of billions on community activities this year.

Recently, within the framework of the 'ASEAN Business Forum with EVFTA,' it became one of three banks honoured with the Typical Enterprises of Viet Nam-ASEAN-EU 2021 award for its contributions to economic development and international integration.

With the outstanding results it achieved in the first quarter of the year, HDBank expects to achieve the business targets it has set itself for this year. — VNS

HDBank Q1 profit tops $91 million, on course to achieve year’s targets have 586 words, post on bizhub.vn at April 23, 2021. This is cached page on VietNam Breaking News. If you want remove this page, please contact us.