The district administration, health workers and police officers were making a list of permanent residents in the alley and placing barriers to prevent people from entering the alley. 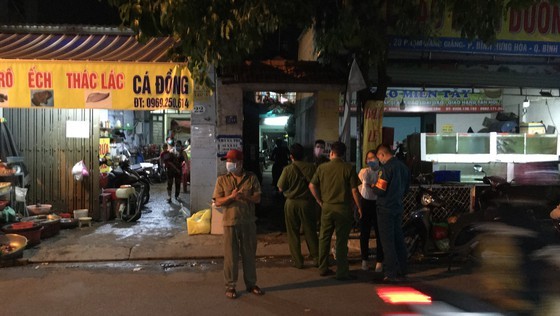 The city Center for Disease Control said that it has recorded one Covid-19 case who has had a close contact with Covid-19 positive man in the Northern Province of Ha Nam.

The man hailing from Ha Nam Province paid a visit to his relatives in Binh Tan District's alley. After receiving the information of the F1 case, HCMC authorities were as quick as possible to implement preventative measures. The contact was brought to a centralized isolation area.
He had hung out with the positive man in Ha Nam on April 22. Later, he flew to HCMC on April 27 from Hanoi-based Noi Bai Airport to Tan Son Nhat Airport in HCMC for a visit to his relatives. Yesterday, he declared his health status to the local medical center after knowing his friend in Ha Nam Province was positive for SARS-CoV-2.
Five other people were found to have contacted closely with the suspected Covid-19 case in Binh Tan District. All of them were isolated for tests. HCMC will continue applying the contact tracking measure.
Vietnam is on high alert after local media reported that infections have been detected in the Northern Province of Ha Nam.

HCMC blocks alley in Binh Tan because of Covid-19 case have 335 words, post on sggpnews.org.vn at April 30, 2021. This is cached page on VietNam Breaking News. If you want remove this page, please contact us.