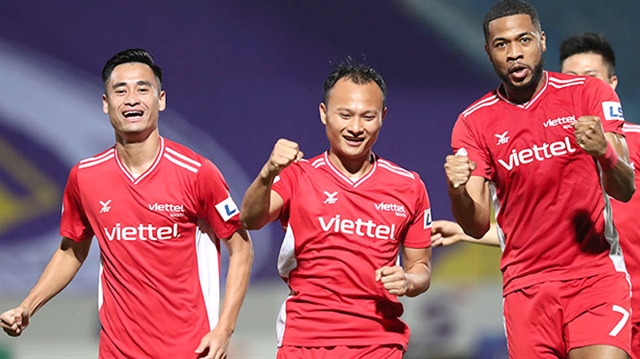 Viettel’s Nguyễn Trọng Hoàng (middle) celebrates scoring what turned out to be the winning goal in the Hà Nội derby with his teammates. Photo thethaovanhoa.vn

HÀ NỘI — If new Hà Nội FC coach Hoàng Văn Phúc is to turn the club's fortunes around, Wednesday night's performance in the capital city derby was an inauspicious start.

Viettel came away from the match at Hàng Đẫy Stadium with a 1-0 win, condemning Hà Nội to their second defeat in a row and extending the defending champions' solid if unspectacular winning streak to a third match.

In truth, judging Phúc on Wednesday's showing would be harsh, as Hà Nội were missing no less than five first-team players due to a combination of injuries and suspensions, but expectations are high at the club, so the new gaffer will be under pressure to start picking up points sooner rather than later.

Viettel, nominally the away team as the clubs share a stadium, took the lead just seven minutes in through veteran midfielder Nguyễn Trọng Hoàng.

After Hà Nội were caught in possession in their own half, Viettel midfielder Vũ Minh Tuấn slipped the ball to Hoàng, who drove forward and unleashed a shot from the edge of the box that wrong-footed Hà Nội goalkeeper Bùi Tấn Trường.

The men in purple almost levelled the score nine minutes later when Nguyễn Quang Hải’s free-kick rattled the post, though the defensive fragility that has plagued them this season was exposed just seconds after that effort, as a long ball put Viettel's Tuấn through on goal. Luckily for Hà Nội, Trường was able to smother the danger.

Hà Nội’s best chance of the half went begging in the 30th minute when Trương Văn Thái Quý was played through with a ball over the top, but the midfielder's lobbed shot sailed harmlessly over Trần Nguyên Mạnh’s crossbar.

Early in the second half, the influential Hoàng dug out a shot from just inside the area after forward Venancio Caique caused a nuisance of himself in the Hà Nội box, but Trường pushed the ball wide for a corner.

Viettel should have doubled their lead from said corner, after a beautifully worked set-piece routine presented Caique with a glorious chance from the edge of the six-yard box, but the Brazilian's shot was brilliantly saved by Trường.

Hà Nội began pressing ever further forward in search of a goal and would have been caught out in the 58th minute if it weren't for more heroics from Trường.

After a superb piece of counter-attacking play, Viettel's Dương Văn Hào found himself within sight of goal but his initial shot was saved by Trường. Hào had the presence of mind to flick the rebound into the path of Tuấn who should have buried the chance, but Trường made a superb recovery and kept that effort out too.

In days gone by, Hà Nội would have made Viettel regret missing such gilt-edged chances, but the closest they came to a goal in the second half was a fizzing shot over the bar from Hải, who looked far from his best all night and seemed more interested in trying audacious flicks than anything more productive with the ball.

For a derby, this match was far from bad-tempered, but still, the referee conspired to send a player of each side off in the dying minutes, first Hà Nội substitute Phạm Đức Huy, who received a straight red for a flailing arm to the face of a Viettel player, and then Caique for an innocuous challenge which resulted in a second booking.

The result left Viettel third on 16 points, just two behind overnight leaders Than Quảng Ninh and firmly in the title race again after an indifferent start to the season.

Hà Nội are mired in seventh place on 10 points, and with their next two fixtures against Quảng Ninh and second-placed Hoàng Anh Gia Lai, things could be about to go from bad to worse for Phúc. VNS

Hà Nội is red: Viettel win derby have 882 words, post on vietnamnews.vn at April 8, 2021. This is cached page on VietNam Breaking News. If you want remove this page, please contact us.