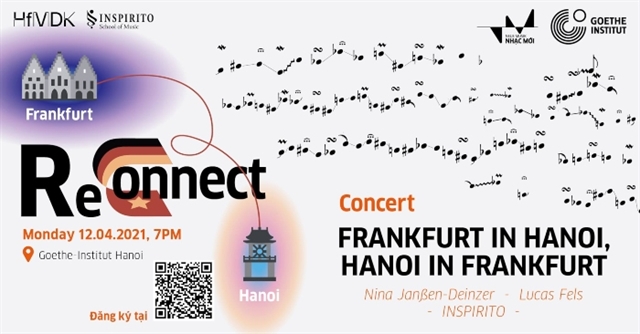 Musicians from Germany and Việt Nam will join to perform at a concert where they will react creatively to the difference of geography and time zone.

On Monday, a concert entitled 'ReConnect – Concert: Frankfurt in Hanoi, Hanoi in Frankfurt' will take place at Goethe Institute from 7pm.

The Hà Nội-based ensemble will perform at the Goethe Institute with Nina Janßen-Deinzer and Lucas Fels from the Academy of Music and Performing Arts in Frankfurt am Main.

To join the concert, register via eventbrite.co.uk/e/frankfurt-o-ha-noi-ha-noi-o-frankfurt-tickets-149300300217 . VNS

German and Vietnamese musicians to perform at e-concert have 288 words, post on vietnamnews.vn at April 8, 2021. This is cached page on VietNam Breaking News. If you want remove this page, please contact us.