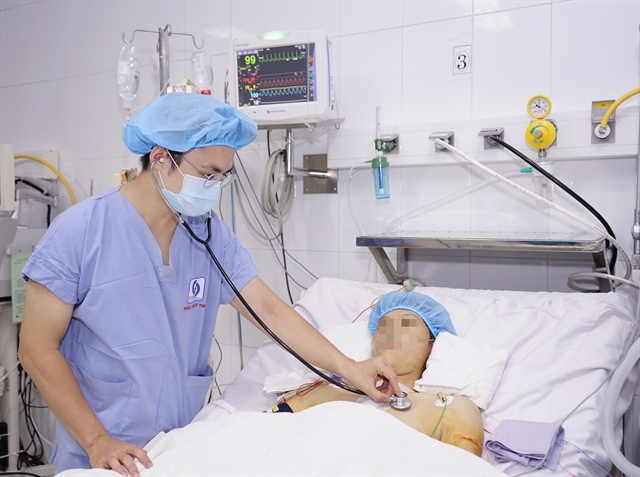 A doctor at Gia Định People's Hospital examines a 40-year-old patient with a rare, life-threatening heart tumour. — Photo courtesy of the hospital

The patient on March 31 was hospitalised at Gò Vấp District Hospital due to shortness of breath and chest pain. An echocardiography showed a tumour in his heart, which caused heart failure and severe anaemia.

The hospital sent the patient to Gia Định People's Hospital for urgent surgery. Doctors said the large tumour in both the left atrium and left ventricle was at risk of being stuck in the heart’s valves.

The spread of the tumour had also caused mitral regurgitation, which the doctors treated.

Dr Bùi Minh Thành, head of cardiac surgery department at the Gia Định People's Hospital, said that most heart tumours cause no symptoms and are not located at the two valves. The patient's tumour was special, causing a sudden blockage of blood flow in the heart, which could lead to acute heart failure and, if not treated in time, death.

The patient is in stable condition. — VNS

Doctors in HCM City remove rare, life-threatening heart tumour have 351 words, post on vietnamnews.vn at April 2, 2021. This is cached page on VietNam Breaking News. If you want remove this page, please contact us.