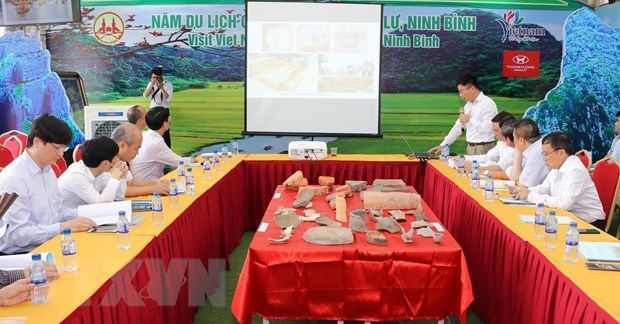 Participants at the workshop (Photo: VNA)

Ninh Binh (VNA) – Archaeological excavation and research at the Hoa Lu Ancient Capital and other sites in the northern province of Ninh Binh were reviewed at a workshop held by the provincial Department of Culture and Sports, the Institute of Archaeology, and the Vietnam Academy of Social Sciences on April 20.

Held as part of activities responding to the Visit Vietnam Year 2021, participants at the workshop lauded the results of the endeavour, saying it has contributed to preserving and promoting the values of cultural heritages in Ninh Binh.

The excavation work has revealed unique architecture at Hoa Lu, which vividly reflect national construction and defence as well as royal cultural life, and the formation and development of the locality's administrative system during the 10th century.

At brick tombs in Nho Quan and Gia Vien districts, initial research results noted that these were tombs from the Eastern Han Dynasty, proving the development of culture, economy, and politics and clarifying how Hoa Lu was established and developed.

Research results initially recognised that the inner city of Hoa Lu in the 10th century had a much larger distribution area of architectural works than experts and researchers previously imagined.

At the workshop, research and excavation units proposed adjustments to land use planning and the detailed plan for the conservation – embellishment and promotion of specially-protected areas in the ancient capital, which were approved by the provincial People's Committee in 2009, to serve research, excavation, and conservation in the time to come./.

Archaeological excavation, research at Hoa Lu ancient capital reviewed have 391 words, post on en.vietnamplus.vn at April 22, 2021. This is cached page on VietNam Breaking News. If you want remove this page, please contact us.