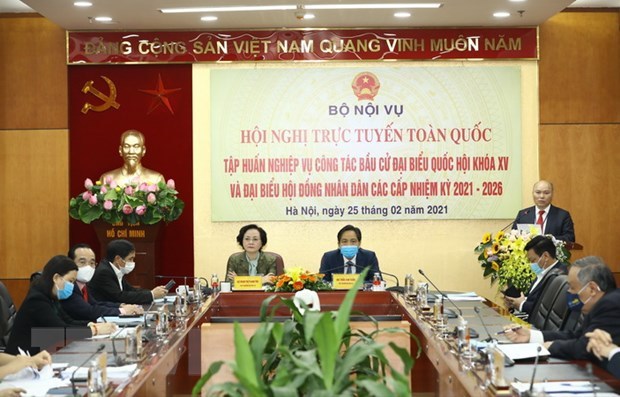 An online training session on the examination and monitoring of the elections of deputies to the 15th-tenure National Assembly and all-level People's Councils for the 2021-2026 tenure (Photo: VNA)

Hanoi (VNA) – Committees of the Vietnam Fatherland Front (VFF) at all levels are promptly making preparations for the second consultative conferences on the nomination of candidates for the upcoming general elections , following the first ones in February.

The elections of deputies to the 15th-tenure National Assembly and all-level People's Councils for the 2021-2026 tenure are scheduled to take place on May 23, which falls on Sunday.

This is an important political event aimed at selecting outstanding and deserving deputies who represent the people's will, aspirations, and right to mastery in the NA and all-level People's Councils in the new tenure, which is expected to help build, consolidate, and perfect a law-governed socialist State of the people, by the people, and for the people under the leadership of the Communist Party of Vietnam.

The first consultative conferences were held in all 63 cities and provinces nationwide from February 3 to 17.

The VFF Central Committee said the first conferences agreed that 1,076 candidates will be nominated for the NA election, equivalent to 2.15 times the number of deputies planned to be elected. The difference between the numbers of candidates and deputies elected was 2.04 times in the 14th NA election and 2.2 times in the election to the 13th legislature. 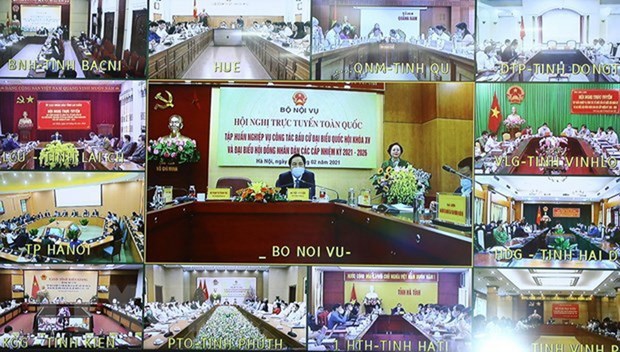 A view of the online training session on the examination and monitoring of the general elections (Photo: VNA)

On the basis of the first consultative conferences' outcomes, preparations for the second conferences are being promptly made by VFF committees at all levels, so as to ensure that upcoming events will take place in a democratic and quality manner and be in line with the law.

To choose moral and talented persons, the NA Standing Committee issued a new regulation stating that a deputy of the NA or People's Councils must receive support from more than 50 percent of voters in their residential area.

Vice President of the VFF Central Committee Ngo Sach Thuc said voter confidence is an important measurement of the eligibility of NA and People's Council deputies.

Given this, the recent joint resolution of the NA Standing Committee, the VFF Central Committee's Presidium, and the Government paid great attention to candidates' creditability. Those with a low level of creditability in their residential areas or workplace will not be included on the lists of candidates, he said.

The reception and consideration of candidates' dossiers are scheduled to conclude at 5pm on March 14, and the second consultative conferences will take place five days later, on March 19.

The VFF is now stepping up monitoring and examination to gain a good grasp of the implementation of election affairs in localities, thereby identifying any difficulties or violations of election regulations or electoral rules and taking timely measures to ensure that elections are truly democratic and accord with the law./.

Thorough preparations being made to ensure high-quality candidacy for elections have 832 words, post on en.vietnamplus.vn at March 4, 2021. This is cached page on VietNam Breaking News. If you want remove this page, please contact us.