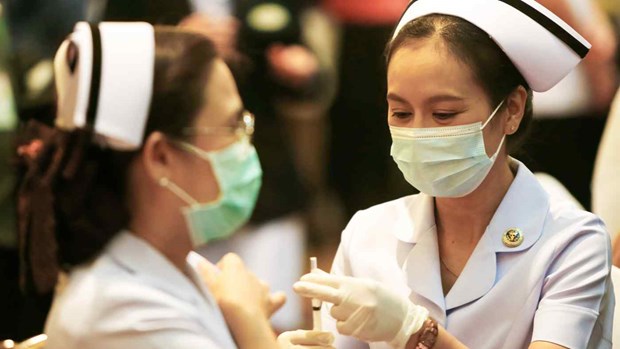 According to a spokesperson of the Thai government, the new batch of vaccine will arrive in Thailand simultaneously with 26 million doses of AstraZeneca vaccine and 2 million doses of Sinovac vaccine of China ordered previously.

Thailand ‘s Ministry of Health is still negotiating to buy more vaccines from other manufacturers as the government prepares to open registration for vaccinations for people.

The country officially started its COVID-19 vaccination programme on February 28.

Thailand reported 42 new COVID-19 cases and one more death on March 2, lifting the total of infections and fatalities to 26,073 and 84, respectively.

Thai Minister of Tourism Pipat Ratchakitprakarn has asked the Ministry of Health to approve the implementation of a vaccine passport system to kick-start the country’s tourism industry this year.

Pipat said on March 1 that the Thai government is waiting for the World Health Organization (WHO) to announce the vaccine passport before enacting this measure.

On March 2, Malaysia granted conditional approval for the use of COVID-19 vaccines made by UK firm AstraZeneca and China's Sinovac, just days after the Southeast Asian nation launched its nationwide COVID-19 vaccination programme.

Malaysia began its COVID-19 vaccination rollout on February 24 using the vaccine developed by US drug-maker Pfizer and German partner BioNTech, as it has tried to rein in a spike in infections and help revive its economy that recorded its worst slump in more than two decades last year.

Malaysia aims to vaccinate at least 80 percent of its population of about 32 million by February next year. Last month, the government said it had secured 66.7 million doses, enough to cover its population./.

Thailand orders additional 35 million doses of AstraZeneca vaccine have 423 words, post on en.vietnamplus.vn at March 3, 2021. This is cached page on VietNam Breaking News. If you want remove this page, please contact us.