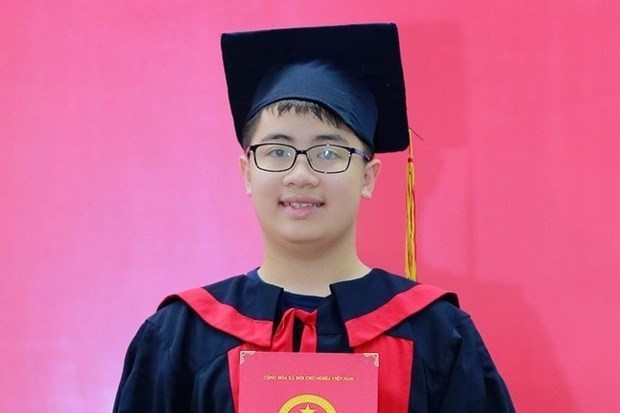 Hanoi (VNA) – Ngo Quy Dang, considered as the "golden student" in mathematics of the High School for the Gifted of Natural Sciences, the University of Natural Sciences, was selected as one of the 2020 ten promising young talents by the Ho Chi Minh Communist Youth Union Central Committee.

Ngo Quy Dang even won the gold medal. His achievement has created a milestone in the history of Vietnam's Mathematic Olympiad.

According to Associate Professor Le Anh Vinh, Deputy Director of the Vietnam Institute of Educational Research, right from the secondary level, Ngo Quy Dang has been a familiar name known by many people in the Vietnamese mathematical sector. The gold medal at the International Mathematics Olympiad continues to be another achievement the outstanding student has made. Before that, he had won many awards in domestic and international competitions. They include the first prize in math in the Hanoi City Competition for excellent sudents in grade 9. In grade 8, Dang won the gold medal in the international group of the Hanoi Open Mathematics Competition (HOMC), a gold medal in the Young Math Talent Compettion, and the national champion in the Kangaroo International Math Competition.

Not only good at math, Dang also achieved many achievements in the subject of English language with the consolation prize of the pupil group in the 2nd National English Olympiad for pupils and students in 2018, a silver medal in the English Olympiad on the Internet for high school students (IOE) at the national level for the 2016-2017 school year.

"What surprises many people even more is that Ngo Quy Dang is also a very charming, witty and funny MC on the school stage," said Mr. Le Cong Loi, Principal of High School for the Gifted in Science. Loi said he was very proud of his student.

According to Vu Nhu Nguyet, teacher of Dang's class, Dang is very funny, proactive student. He enthusiastically participates in all activities in class.

With his wit, Dang as a cheerleader makes the atmosphere more vibrant, Nguyet said, adding that as a good student with a reputation at school, Dang is, however, very sociable and humble, sincere and open.

He is also an active student, enthusiastic in general activities and a responsible person,” Ms. Nguyet said happily about her student.

With his achievements, Dang was selected as one of the 20 outstanding young people of the third Vietnam Young Talent Congress. He was also honored to receive the Second-class Labor Order from the President and became one of the 10 promising young talents of Vietnam in 2021./.

Math student honoured as 2020 promising young talent have 701 words, post on en.vietnamplus.vn at March 15, 2021. This is cached page on VietNam Breaking News. If you want remove this page, please contact us.