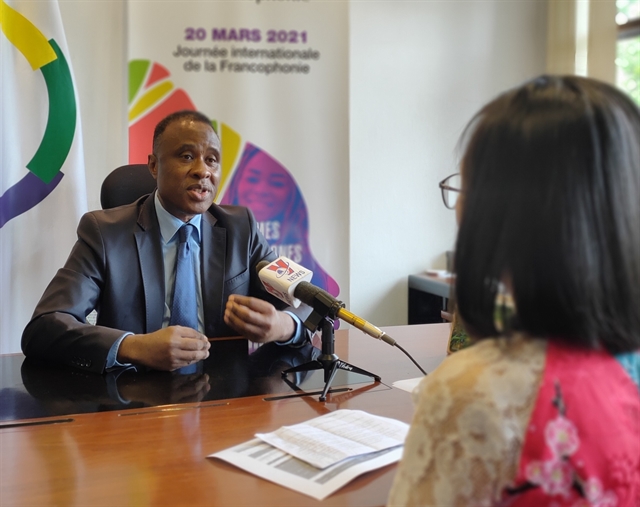 Chekou Oussouman, Chief Representative for the Asia-Pacific of the International Organisation of La Francophonie. — VNA/VNS Photo

HÀ NỘI — Promoting the role of the French language and assisting countries in educational and economic development are among the priorities of Chekou Oussouman, Chief Representative for the Asia-Pacific of the International Organisation of La Francophonie (OIF), during his term.

In an interview with the Vietnam News Agency ahead of International Francophonie Day on March 20, Oussouman, who took over the post last June, described Việt Nam, an OIF member, as an important partner of the French-speaking economic community.

Talking about Việt Nam's economic ties with francophone countries in Africa, he said he has worked with the Ministry of Industry and Trade to seek ways to bolster trade and investment and also underlined the need to create the necessary conditions for young entrepreneurs in these countries to enhance mutual understanding and further grasp cooperative opportunities.

The OIF has held working sessions with Vietnamese partners like the Trade University, the Foreign Trade University, and the Vietnam Chamber of Commerce and Industry (VCCI) to quickly connect them with partners in Central and West Africa, including Morocco, Côte d’Ivoire, Gabon, and Cameroon.

The organisation will also support decentralised cooperation between Việt Nam and European nations that are OIF members, such as between certain French regions and Vietnamese provinces, so as to better capitalise on the EU-Việt Nam Free Trade Agreement (EVFTA), according to Oussouman.

In terms of education, he spoke highly of the Communist Party of Việt Nam, at the recent 13th National Congress, identifying education and training in the digital era as one of the priorities for the years to come.

The OIF will consolidate new forms of cooperation between partners, to create opportunities for Vietnamese students to study in Europe, Canada, or Africa and vice-versa, he noted, adding that it will also create the conditions for French-language teachers in Việt Nam to engage in training in other francophone countries.

He said the OIF is arranging a week-long trip to Việt Nam by an economic, trade, and investment promotion delegation, with representatives from Europe, Canada, and Africa, to discuss economic issues, seek partnerships, and, possibly, sign agreements.

During the interview, Oussouman spoke highly of Việt Nam's response to COVID-19 as well as its people's trust in government decisions, adding that he was impressed that the administration, military, police, civil society, young people, and every resource in society have all been mobilised to fight COVID-19.

Applauding the solidarity Việt Nam has shown in the fight, he stressed that many support programmes and activities have been carried out to help disadvantaged people, with "rice ATMs" being a typical example.

He also appreciated Việt Nam's support for other countries, as seen through its presentation of test kits, face masks, and many other goods. — VNS

Francophone organisation to help VN boost ties with francophone countries have 616 words, post on vietnamnews.vn at March 20, 2021. This is cached page on VietNam Breaking News. If you want remove this page, please contact us.