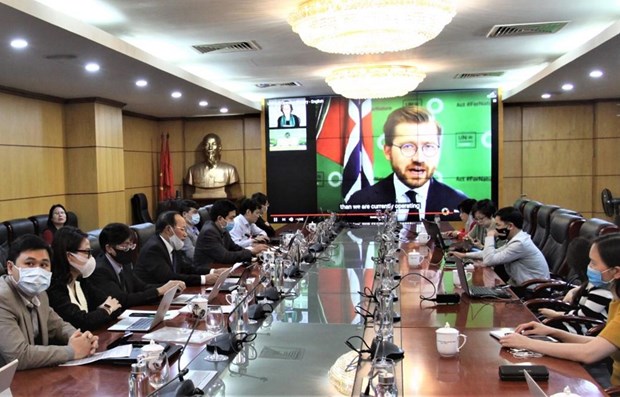 An overview of the session (Photo: Vietnam Environment Administration )

The overall theme of UNEA-5 is “Strengthening Actions for Nature to Achieve the Sustainable Development Goals ”.

The theme calls for strengthened action to protect and restore nature and nature-based solutions to achieve the SDGs in its three complementary dimensions (social, economic and environmental).

The delegates discussed the implementation of the UN General Assembly’s Resolution 73/333 on strengthening global environmental law and governance, and considered the organisation of a special session celebrating the 50th anniversary of the UN Environment Programme (UNEP) in March.

The remaining agenda items of the UNEA-5 are expected to be discussed in-person from February 28 to March 2.

UNEA-5 provides member states and stakeholders with a platform for sharing and implementing successful approaches that contribute to the achievement of the environmental dimension of the 2030 Agenda and the SDGs, including the goals related to the eradication of poverty and sustainable patterns of consumption and production.

Vietnam also attended the fifth meeting of the Open-ended Committee of Permanent Representatives (OECPR-5) held online from February 15-17, in preparation for UNEA-5.

The UNEA is the world’s highest-level decision-making body on the environment, with a universal membership of all 193 member states. Through its ministerial declaration and resolutions, the Assembly provides leadership, catalyzes intergovernmental action on the environment, and contributes to the implementation of the UN 2030 Agenda for Sustainable Development.

The UNEA is also the governing body of the UNEP. It has had four sessions starting in 2014, and was preceded by the Governing Council of the UN Environment Programme, which was composed of 58 member states./.

Vietnam attends fifth session of UN Environment Assembly have 392 words, post on en.vietnamplus.vn at February 23, 2021. This is cached page on VietNam Breaking News. If you want remove this page, please contact us.