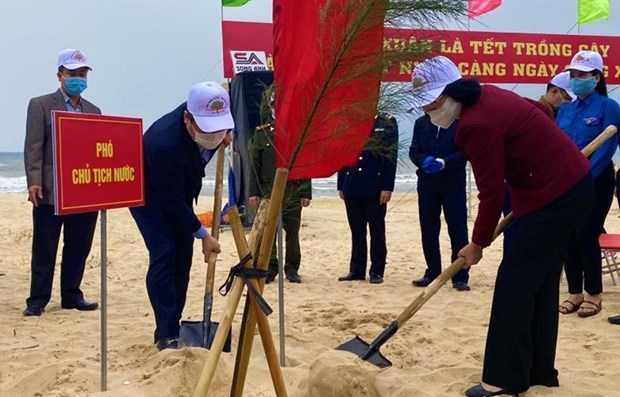 In her remarks, Thinh recalled the tree-planting campaign launched by President Ho Chi Minh in the Spring in 1960, saying that generations of Vietnamese have responded to his call for environmental protection in the time since.

Climate change and extreme weather patterns have had negative impacts on many areas nationwide, she said. In 2020, central provinces, including Quang Binh , suffered substantial losses from storms and floods.

Given this, she stressed, tree planting and forestation hold strategic significance for the country's sustainable development.

She called for joint efforts in the campaign, particularly the initiative from Prime Minister Nguyen Xuan Phuc to plant a billion trees over the next five years.

A representative from the MARD said that during the 2016-2020 period, some 227,000 ha of concentrated forests and 67 million scattered trees were planted each year.

The rate of forest coverage reached 42 percent last year and the export value of wood and wooden products was 13.17 billion USD, up 16.4 percent year-on-year.

Forest coverage is expected to remain unchanged during the 2021-2025 period, with export revenue set at 20 billion USD.

Chairman of the provincial People's Committee Tran Thang reported that the locality planted 8,100 ha of concentrated forests and harvested 450,000 cu.m. of wood in 2020.

After the launch ceremony, Thinh paid tribute to President Ho Chi Minh and martyrs in Quang Binh, and visited a centre for disabled children in Dong Hoi city./.

Vice President joins tree-planting festival in Quang Binh have 336 words, post on en.vietnamplus.vn at February 18, 2021. This is cached page on VietNam Breaking News. If you want remove this page, please contact us.