There will be no let-up in troop deployment or Army operations along the Pakistan borders to fight terrorism and infiltration, military officials said on Thursday after a ceasefire agreement was announced between the two armies which they called a step towards regional peace. 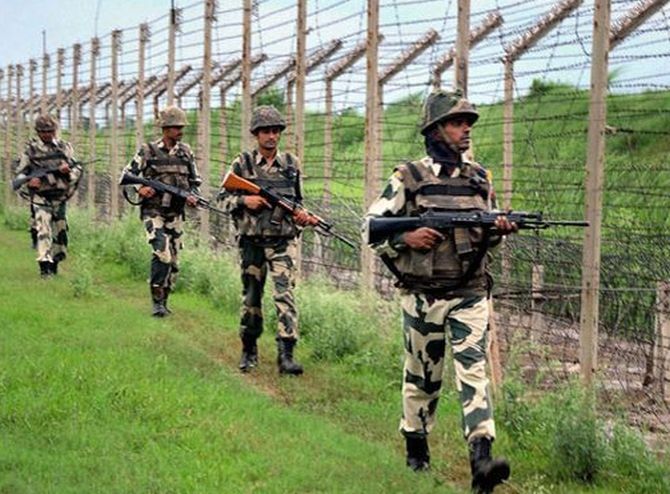 IMAGE: Kindly note that this image has been posted for representational purposes only. Photograph: PTI Photo.

The officials said the ceasefire does not mean that the Army’s fight against terrorism has come to a halt and its alertness and vigil will not be lowered. They said they are “cautiously optimistic” on the ceasefire.

The development is likely to give relief to civilians from both the sides. From 2018-2020, 70 civilians were killed and 341 injured in cross-border firings along the International Border and the Line of Control.

As troops remain deployed along the Line of Actual Control in eastern Ladakh, the sources added that the situation along the northern borders has no bearing on the decisions along the LoC and the western front.

According to the officials, over the last few years, the Army’s counter-infiltration grid along the LoC has further strengthened and terrorists have found infiltration across the LoC increasingly difficult.

“While there will be no let-up in counter-terrorism and counter infiltration operations in our endeavour is to achieve peace and stability which is beneficial for the region,” an official said, adding the armed forces enjoy freedom on operational deployment.

“The Indian Army remains committed to fight the scourge of terrorism. Acts of terror will not be tolerated and a befitting response would await any misadventure,” the official said.

On February 22, the Director General of Military Operations held discussions over the established mechanism of hotline contact and reviewed the situation along the Line of Control and all other sectors in a “free, frank and cordial atmosphere”.

“In the interest of achieving mutually beneficial and sustainable peace along the borders, the two DGMOs agreed to address each other’s core issues and concerns which have propensity to disturb peace and lead to violence.

“Both sides agreed for strict observance of all agreements, understandings and cease firing along the Line of Control and all other sectors with effect from midnight of February 24/25,” the joint statement issued by India and Pakistan said.

No let-up in troops at Pak border after ceasefire: Army have 527 words, post on www.rediff.com at February 25, 2021. This is cached page on VietNam Breaking News. If you want remove this page, please contact us.