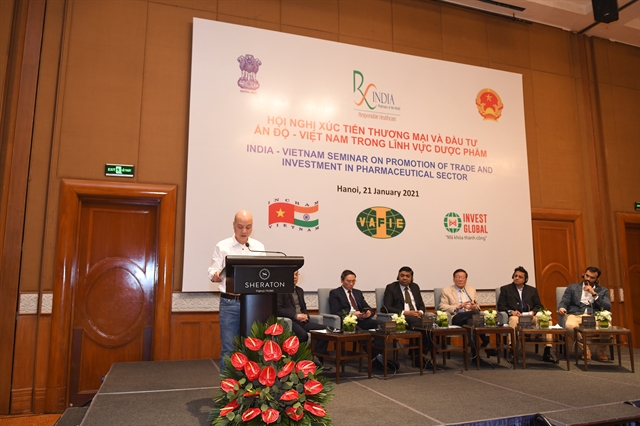 HÀ NỘI — Experts pointed out lots of opportunities for Vietnamese and Indian enterprises in the pharmaceutical industry in Việt Nam in Hà Nội yesterday.

In an effort to promote trade and investment in the pharmaceutical sector, the Embassy of India, International Investment Promotion Alliance, the Association of Foreign Invested Enterprises and Vietnam Chamber of Commerce and Industry (Vafie) organised a seminar to connect experts and enterprises from the two countries.

According to the embassy, India was popularly known as the pharmacy of the world, earning its credibility as one of the largest manufacturers of generic drugs. It also said the Indian pharmaceutical sector supplies over 50 per cent of global demand for various vaccines, 40 per cent of generic demand in the US and 25 per cent of all medicine in the UK. Indian drugs are exported to more than 200 countries in the world, with the US being the key market.

Indronil Sengupta, president of India Chamber of Commerce in Hà Nội, said: “India has a large pool of scientists and engineers with potential to steer the industry ahead to greater heights,” measuring the market size of Viet Nam, with nearly 100 million of people, had an estimated total value of $7 billion in 2019 and would be growing at 8 per cent till 2024.

At the same time, local drug manufacturers were able to meet half of the total medicine market demand, approximately 60 per cent of pharmaceutical end products, 90 per cent of active pharmaceutical ingredients while most of the raw materials for the production were currently imported from India, China and other places.

According to Indian experts, new regulations from various FTAs in Việt Nam brought opportunities and challenges to Indian pharmaceutical companies which could enjoy lower taxes in the industry compared with companies in European countries.

Nguyễn Tuấn Anh, factory director of Sao Kim Pharmaceutical Joint Stock Company, which produces and exports anti-malarial drug materials to Africa and some Southeast Asian countries, said his company expected to partner more with the Indian firms for more projects in Việt Nam to serve the potential pharmaceutical market with a growth rate of more than 15 per cent each year.

Anh told Việt Nam News: “With the advantages in pharmaceutical materials and natural active ingredients that can meet domestic and export demand, we aim to develop high technology factories for pharmaceutical products to better compete in the market.”

Anh said more FTAs, especially ones with India, brought both chances and challenges to local companies like his as multinational pharmaceutical corporations could invest in and acquire the private enterprises, increasing competition.

As most of the local pharmaceutical companies mainly produce inexpensive and common drugs, while drugs of high value still have to be imported, Anh said he was looking for Indian partners who can incorporate, transfer technology or participate in part of the pharmaceutical active ingredient semi-synthetic chain in Việt Nam.

Anh also expected to own the technology from good co-operation with Indian partners so that his company could soon proactively own the source raw materials in pharmaceutical production, helping Việt Nam avoid the manipulation of raw materials from foreign producers to local production.

Also at the seminar, Phạm Thị Thu, owner of the drug chain Green Pharma 24 in Thanh Hóa, Hà Nội and HCM City, said 50 per cent of turnover was from Indian products which were at much lower prices compared to other imported drugs.

Thu told Việt Nam ews: “Vietnamese consumers love foreign brands and it is easier to advise them to buy Indian products with a price of as much as local products instead of paying for a price of two or three times higher for European imported drugs.”

The current 180 local pharmaceutical manufacturing enterprises and 224 factories meeting GMP (good manufacturing practice) standards, met only 52.5 per cent of the demand while the rest must be imported.

As the report forecast local pharmaceutical industry to increase 11 per cent per year as one of the most stable in the world, reaching $7.7 billion in 2021 and $16.1 billion in 2026, Mại said there was great potential for both sides.

He said: “Vietnamese and Indian pharmaceutical enterprises can establish long-term relationships, proceeding to sign and implement import-export contracts, make a “win-win” investment, contributing positively to the expansion of economic, scientific and technological cooperation relations between the two countries.” — VNS

Vietnamese, Indian pharmaceutical enterprises have great opportunities in Viet Nam have 1004 words, post on vietnamnews.vn at January 21, 2021. This is cached page on VietNam Breaking News. If you want remove this page, please contact us.