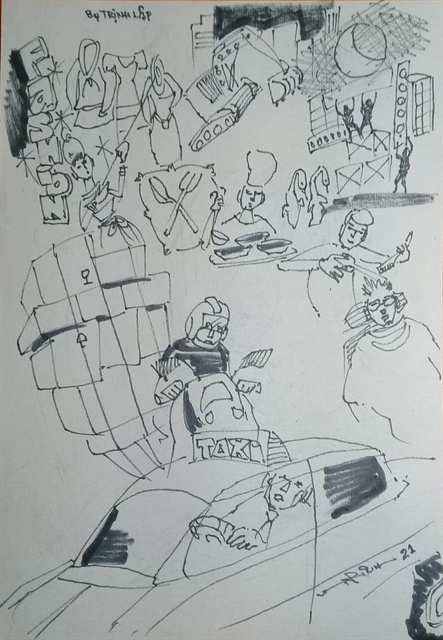 A 9-to-5 job in an air-conditioned space with a stable income is apparently rather unappealing to many young Vietnamese, who prefer manual jobs like delivering goods or being a motorbike taxi driver, which gives them more freedom and a bigger payday.

Trần Tuấn Tú, who was born in 1990, recently quit his job as an office worker in Cầu Giấy District in Hà Nội to join the community of Grab riders around town.

His means of living is now his old Wave Alpha. A working day normally begins at 8 or 9 am, or whenever he turns on the Grab app on his mobile phone.

On a busy day, he may finish at 10 pm or even midnight. If the day is slow or he has something else to do, he turns off the app sometime in the afternoon. And if he feels tired or sick, he can decide to take the day off without needing to ask for anyone’s permission.

“My old job paid around VNĐ8 million (US$350) a month, half of which I sent back home to my parents, while the remainder was just enough to cover my basic needs here in Hà Nội, where everything is expensive,” he said.

“It might be more tiring, but I earn more and have more flexible hours. I can easily take a day off whenever I feel sick or have things to do.”

Tú is not the only holder of a bachelor’s degree to decide to leave their job and stable income to deliver goods or ferry passengers around. Some Grab riders used to work as real estate agents, accountants, and even teachers or engineers.

Many young Vietnamese start out working part-time with Grab, putting in a full-day in an office and then becoming a motorbike taxi driver in the evening.

After a while, though, many decide to become full-time Grab riders, like Nguyễn Minh Khang, who used to be a physical education (PE) teacher at a private primary school.

He was actually sad to quit his job as a teacher. He was respected by the students, while as a motorbike taxi driver he has to deal with people from all walks of life who may or may not show him respect. But he generally accepts this as part of the “cost”, as his earnings are double and enough to support his family.

Recent figures reveal a rather depressing figure – more than 100,000 university graduates in Vietnam are unemployed, with many working as a motorbike taxi driver or delivery man or woman out of need, not choice.

The outbreak of COVID-19 made it even harder for young people to find a job in their chosen field or even make ends meet if they live in the city.

According to a report from the General Statistics Office of Việt Nam released last October, some 32 million Vietnamese workers from 15 years of age and above were directly affected by the pandemic, experiencing job losses, layoffs, rotating leave, reduced working hours, or lower incomes.

Conversely, the number of online businesses and delivery drivers mushroomed, especially during the social distancing period. Many of the latter were young people who had recently found themselves out of work.

A recent survey on a forum for young Vietnamese revealed a surprising fact about career aspirations: many respondents actually prefer jobs like selling bread, running a street-side café, or even riding with Grab rather than working in an office, despite many holding bachelor degrees.

Some explained that the purpose of going to university was to make money and become wealthy.

Instead of spending eight dull hours in an office and watching their youth slip by, they prefer a job that gives them both money and freedom and then the opportunity to start a business.

According to psychologist Lê Thị Minh Nga from HCM City’s 1088 consulting service, there has been a clear change in the thinking of many young Vietnamese.

“A decade ago, getting a job in an air-conditioned office was a common dream,” she said. “Some families were willing to spend large sums on securing such a job for their children, despite the low wages.”

“These days, young people are more practical when considering the benefits their employment bring.”

“On the one hand, it has caused people to devalue bachelor degrees, believing that study is no longer the only way to change your life for the better,” Nga said. “And it also results in many young people losing their way in life.”

When young people consider only the financial benefits, they can’t see what else a job in their field of study can provide.

For example, she explained, “when comparing the job of motorbike taxi driver with that of an office worker, young people just think about the immediate benefits of more money and more freedom”.

“The ‘cost’ of working as a motorbike driver, though, include being out in dangerous traffic all day, which increases the likelihood of having an accident,” she explained. “Likewise, selling bread or coffee on the street might come with a decent income, but young people can easily lose the professional contacts they’ve made, some of their specialised knowledge, and more importantly, the opportunity to constantly improve, which can only be done in an office environment.”

Income, she believes, should never be the top priority in job selection.

“Issues like whether the job is suitable for your long-term plans and dreams must always be taken into account,” she said. VNS

There’s more to working life than money have 1090 words, post on vietnamnews.vn at January 24, 2021. This is cached page on VietNam Breaking News. If you want remove this page, please contact us.