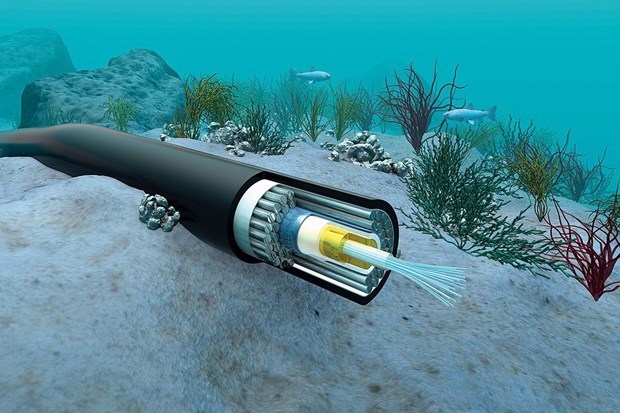 Hanoi (VNA) – Two international undersea cable lines – Intra Asia (IA) and Asia Pacific Gateway (APG) – that make up the majority of Internet connection capacity from Vietnam to the world have encountered problems since the beginning of this year.

The IA cable, connecting Vietnam with Hong Kong and other parts of Asia, experienced technical problems starting January 1. The cause was determined by a cable error on segment 1, about 49 km away from the docking station at Singapore's cable line. The problem affects all connections to Singapore.

Meanwhile, the APG cable had a problem on the S3 branch, interrupting information in the direction of connecting to Hong Kong (China), Japan.

Currently, Internet service providers in Vietnam have not received any plan to repair the trouble on the two undersea cables.

However, Viettel, VNPT and FPT are the providers that are using a lot of capacity on the two cable lines have diverted traffic to other undersea cables to maintain international connections.

For example, CMC Telecom increased capacity through the cable line across Southeast Asia (A-Grid), connecting the Internet from Vietnam to Cambodia, Thailand, Malaysia and Singapore.

The VNPT said that after the incident, VNPT Net and VNPT branches in provinces and cities across the country have actively navigated to other cables to ensure the quality of service to customers.

According to a Viettel representative, the navigation of international traffic between cables is automatically performed by Viettel’s system to maintain service quality for its customers, businesses and operators on these undersea cables. The representative also said with disruption in two cables at the same time it was difficult to avoid flickering during peak hours (20h-22h).

According to Vu The Binh, CEO of NetNam Company, and Vice President and General Secretary of the Vietnam Internet Association (VIA), Vietnamese service providers are used to dealing with undersea cable incidents. They will navigate through other undersea cables such as AAG and other cable routes in the north and southwest.

“Regarding NetNam, we do the same as other network operators, which is to open offset traffic through other channels with prepared scenarios.

"Service quality basically does not affect much, partly because NetNam only has groups of customers – organisations, where the demand for bandwidth is not much but stable quality is needed," he said.

It usually takes 2-4 weeks to fix a broken cable on the seabed. However, he said, it will also depend on the weather conditions in the area where the cable is damaged.

Vietnam, where more than 64 percent of the population are internet users, has six submarine cable systems, plus a 120 gigabit channel that runs overland through China.

The APG cable, officially launched in December 2016, is capable of providing bandwidths of up to 54 Tbps (Terabit per second). It runs for around 10,400 km, with connection points in mainland China, Hong Kong, Taiwan, Japan, the Republic of Korea, Malaysia, Singapore, Thailand and Vietnam.

The IA cable, which transfers data between Vietnam and Europe, North America and South America, began operations in January 2009./.

Repairs to Vietnam's two undersea cables to take weeks have 689 words, post on en.vietnamplus.vn at January 12, 2021. This is cached page on VietNam Breaking News. If you want remove this page, please contact us.