Germany will be doing away with vaccine prioritization by age group by June, Chancellor Angela Merkel said after discussing the vaccination drive with the heads of Germany’s 16 states on Monday.

“This does not mean that everyone can then be vaccinated immediately,” Merkel said.

“But then everyone can apply for a vaccination appointment, and they will then be given one according to the supply,” the chancellor added.

Merkel also cautioned that Germany could expect a difficult social debate if only part of the population is vaccinated as those who get the jabs could ultimately crave more freedoms.

“We will enter a transition phase that will not be easy,” she warned. “We have to deal with this question very sensitively.”

The chancellor said the German government was looking at relaxing curbs for people who are fully vaccinated against COVID-19.

Citing a study from the country’s official Robert Koch Institute, Merkel said  that fully vaccinated people and those who have recovered, “no longer pose a relevant infection danger.”

She said people who have received both jabs should “obviously” be authorized to get a haircut or go into a shop without having to provide a negative coronavirus test, and be exempt from quarantining after contact with an infected person.

Those who can prove they have recovered from a coronavirus infection, for example by showing a positive PCR test that is at least 28 days old, should also have the right, she said.

Merkel did not comment on when the relaxations might be introduced but said the government would prepare a decree setting out its proposals, which will then be discussed in the Bundestag.

Concerning the resumption of tourism activities during summer , such as the reopening of hotels, Merkel said that it was too early to comment.

“I can’t say today. That depends on the course of what we’re doing right now,” she said, stressing that much more effort to combat the coronavirus was still needed.

How is the vaccination drive going?

A month ago, the German government’s pledge that everyone who wants a vaccine will get one by July seemed like an impossible fantasy. Barely a few hundred thousand people were receiving a dose each day, vaccine supply was in disarray and many people were not taking up appointments when invited.

Now, the vaccine program seems to be running much more smoothly, with supply chains more reliable and between 500,000 and 700,000 doses administered every day. Over 23% of the population have received their first dose and 7% have had two shots, around double the number at the start of April.

So when Health Minister Jens Spahn announced last week that everyone in Germany could be offered the vaccine by June, many saw the goal as feasible. 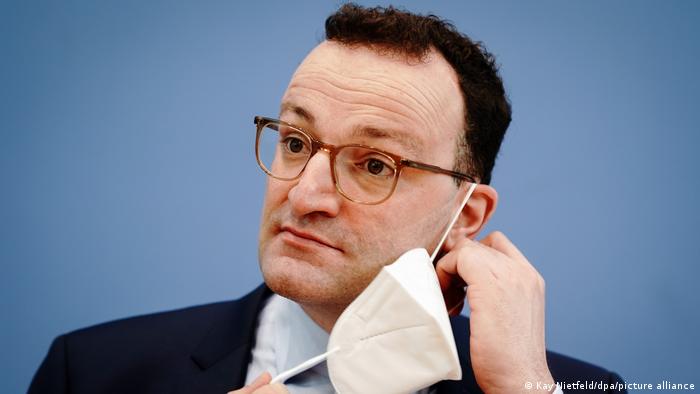 Also high on Monday’s summit agenda is the proposal from the justice ministry that those who have been vaccinated or who were already infected should be granted “freedoms” from restrictions and be treated like people who have a negative test result.

Who has been vaccinated so far?

One of the most contentious issues in Germany right now is whether the prioritization of certain groups should be lifted.

In late 2020, even before vaccines were available, Germany published a list of four priority groups:

The first group includes people over 80 and those who work in high-risk professions, mainly in the medical sector;

The second group consists of people aged between 70 and 80, younger people with a range of pre-existing medical conditions, and those who have contact with high-risk people;

The third group includes people aged 60 to 70 and non-medical front-line workers such as supermarket employees and kindergarten teachers, and the fourth group includes all other adults.

While progress in Germany varies from state to state, most of the country is currently injecting the second or third priority group.

Why are some people not getting vaccinated?

Even though it is not compulsory to get a vaccine in Germany, most surveys show that up to 75% of the population say they will accept a vaccine if offered one. This number has slowly risen since the vaccine rollout began at the end of December.

But the German press has cited other reasons for the sluggish vaccine take-up, including the difficult or complicated booking procedures and the excessive paperwork required ahead of appointments at the vaccine centers.

Since the beginning of April, general practitioners and doctors in big companies have also begun administering vaccines, which has sped up the process.

Which vaccines are available?

Most of the vaccines administered in Germany are produced by BioNTech-Pfizer, with a smaller proportion of Moderna and AstraZeneca vaccines available. Negotiations for the purchase of other vaccines are underway.

Ongoing controversy around the British-Swedish AstraZeneca vaccine has made many people nervous.

Use of the AstraZeneca vaccine was briefly halted in Germany and several other EU countries in March when reports of blood clots emerged, despite the European Medical Authority recommending that the benefits outweighed the risks.

Currently, AstraZeneca is only recommended to those over 60 in Germany, although several states have urged adults of any age to accept AstraZeneca, so long as they have consulted a doctor, to stop the doses potentially going to waste.

But despite the statistically negligible health risks, AstraZeneca remains less popular in Germany. Chancellor Angela Merkel was vaccinated with AstraZeneca earlier in April, in what many saw as a publicity move to promote the vaccine’s safety.

Germany in line with EU

The EU as a whole is “confident” of achieving “herd immunity by the summer.” Most scientists say at least 70% of the population needs to be vaccinated for this to be achievable.

After squabbles over purchases of personal protective equipment during the first wave of the pandemic last spring, EU countries agreed to make a joint effort in procuring vaccine doses. But this approach backfired earlier in the year when the EU initially focused on purchasing vaccines rather than producing them, which applied particularly to AstraZeneca.

The EU announced on Monday it will seek legal action against AstraZeneca because of delivery delays.

This vaccine is mostly produced in the UK, but according to the deal AstraZeneca struck with the UK government, domestic supplies had to be fulfilled first. This is part of the reason why the UK is so much further ahead than the EU in vaccine rollout, with over half the population having received one jab and 17% having received two: The country does not export many vaccine doses.

The EU, meanwhile, has exported up to half of the BioNTech-Pfizer vaccine produced in EU factories. 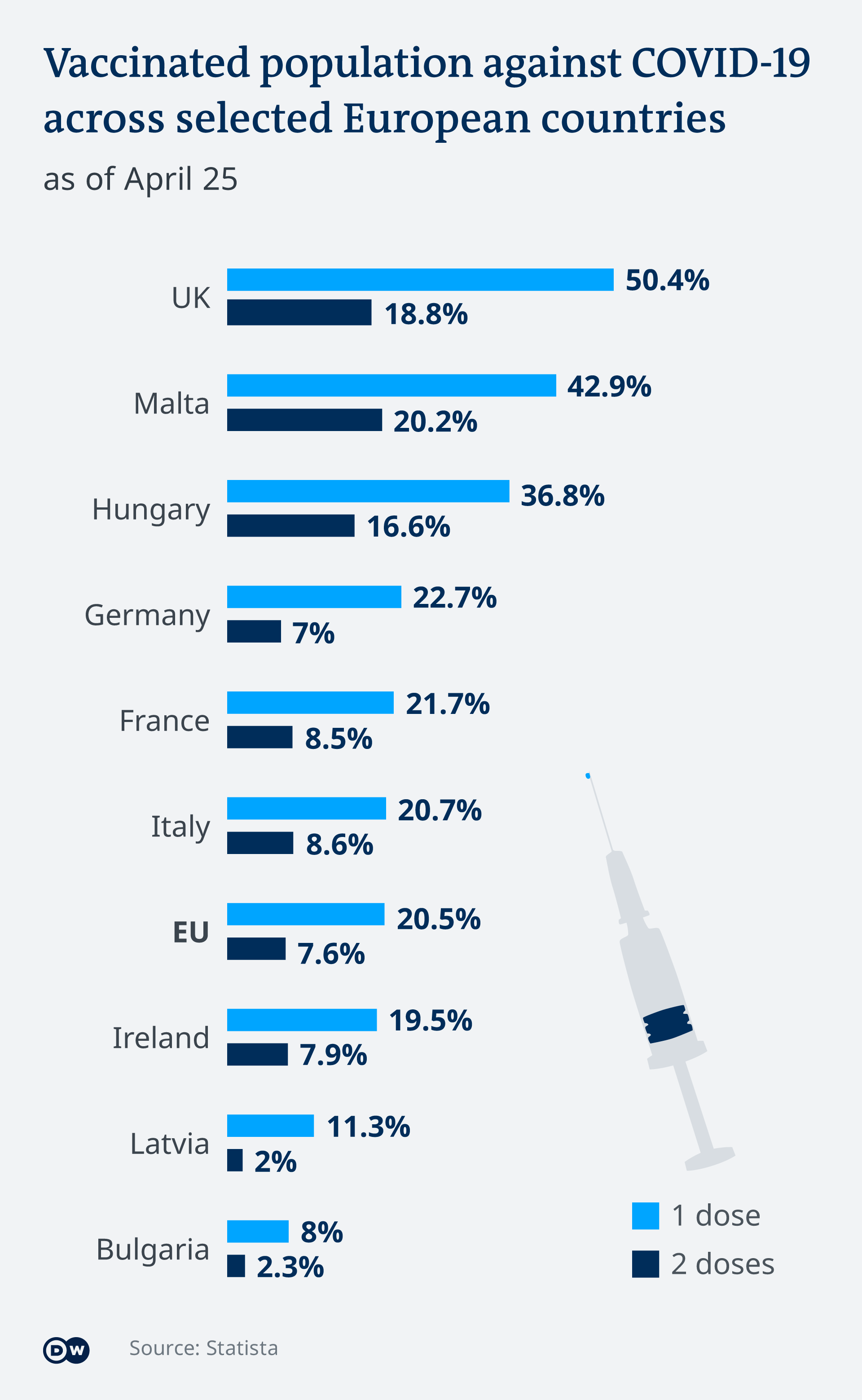 The UK is ahead of EU countries in vaccination progress

The upshot of all of this is that the EU as a whole had fewer vaccine supplies to go around, angering many people as the third wave of the pandemic continues to rage across the continent. But AstraZeneca and other suppliers have now sped up production and supply chains are more stable.

Germany’s 7% of fully vaccinated adults is around average in the EU. Malta is leading the way: 20% of its population has received both doses. In Hungary, which controversially approved the Russian Sputnik vaccine, around 16% of adults are fully protected. In France, Ireland, and Italy around 8% of adults have been fully vaccinated, while Bulgaria and Latvia have given two doses to less than 2% of people.

While you’re here: Every Tuesday, DW editors round up what is happening in German politics and society, with an eye toward understanding this year's elections and beyond. You can sign up here for the weekly email newsletter Berlin Briefing, to stay on top of developments as Germany enters the post-Merkel era.

Merkel: Germany to let everyone apply for vaccine by June have 1431 words, post on www.dw.com at January 26, 2021. This is cached page on VietNam Breaking News. If you want remove this page, please contact us.