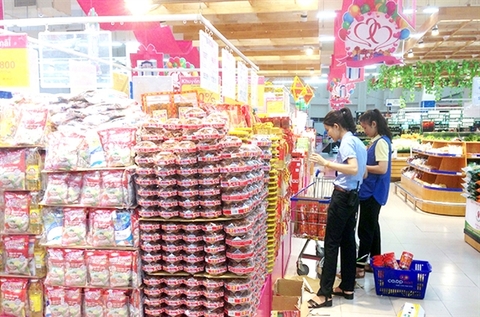 Food companies in HCM City have enough stocks to meet demand during Tet in mid-February, Trieu Do Hong Phuoc, head of the HCM City People’s Council’s Committee for Economy and Budget, has said.

Authorities have stepped up inspection of food sold at wholesale markets to ensure safety during the festival, he said.

This year it plans to set up 20 teams of inspectors to check 8,187 establishments besides carrying out surprise inspections of those suspected of violating safety and hygiene regulations.

A delegation from the People’s Council’s Social and Cultural Committee will inspect food and agricultural products at wholesale markets such as Binh Dien, Binh Tay and Binh Tien.

Those inspector teams has already inspected the Hoc Mon Wholesale Market in the namesake district and some markets in District 11.

Le Van Tien, deputy director of the Hoc Mon Market Management and Trade Company, said his market was one of the first two in the city to pilot a safe food model.

“Supervision of the quality of food products is done regularly and diligently.”

The city People’s Committee has also called on businesses participating in the annual price stabilisation programme to increase supply this year.

Their prices are 5-10 per cent lower than market rates.

Saigon Co.op’s multiple retail chains have already begun Tet sales so that customers can buy most of the items now and buy only fresh produce close to the New Year, which falls in mid-February.

Nguyen Vu Toan, deputy general director of Saigon Co.op, said they have stockpiled nearly VND4.9 trillion (US$212.3 million) worth of goods for Tet, a 20 per cent increase from last year. The co-operative would increase quality inspections of its supermarkets 10-fold over normal months, he added.

Saigon Trading Group (Satra) is sourcing over 2.4 tonnes of items like rice, processed foodstuff and pork for supply during Tet, a 63 per cent increase over a normal month.

Pork prices have stabilised due to the country’s efforts to increase the number pigs and import frozen pork, and Satra and its subsidiaries would supply a large number of new products such as seasoned meat and spring rolls during Tet, he said.

Retailers plan to increase the number of cash counters and take other steps to ensure convenience and safety for customers during the peak shopping season.

They will also offer home delivery and sell ancestral offering packs, which used to be traditionally prepared at home during Tet.

They will make sales trips to remote areas. — VNS

HCM City to ensure food safety, steady prices during Tet have 675 words, post on bizhub.vn at January 18, 2021. This is cached page on VietNam Breaking News. If you want remove this page, please contact us.