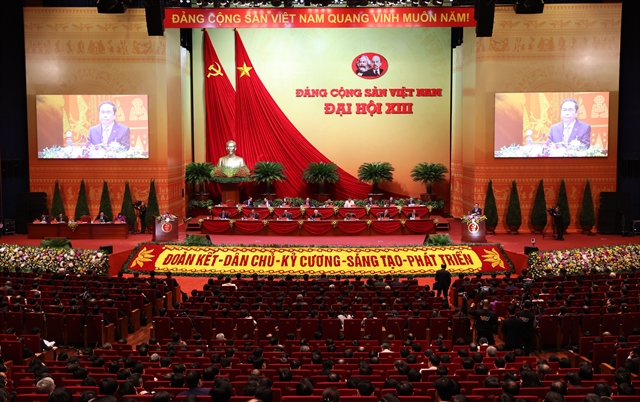 HÀ NỘI — A discussion regarding draft documents on Party building and national development took place under the chair of Prime Minister Nguyễn Xuân Phúc on Wednesday as part of the ongoing 13th National Party Congress.

Participants focused on debating and analysing a series of contents including promoting national solidarity and boosting the performance of the Viet Nam Fatherland Front and other socio-politic organisations; consolidating national defence and building a revolutionary, regular, professional and modern people’s army; improving judicial reform and developing a modern national finance system serving sustainable growth. Renewing the Party’s mass mobilisation, and turning Hà Nội into a hub of culture, science, education, economy, and international transactions, were among other discussions.

Addressing the congress, Trần Thanh Mẫn, Chairman of the Việt Nam Fatherland Front (VFF) Central Committee, said national solidarity is a precious tradition of our people, forged through thousands of years of history of building and defending the country.

The Front and socio-political organisations acknowledged their shortcomings that needed to be addressed, Mẫn said.

The power of great national unity has not been fully promoted and the coordination in solving urgent problems of people in some places has not been dealt with, he said.

“Our country is in the process of industrialisation, modernisation and international integration which pose many new problems, diverse and dynamic development and higher demand for people’s material and spiritual life,” Mẫn said, adding that the gap between the rich and poor as well as the impact of natural disasters, epidemics and climate change are on the increase.

To overcome the shortcomings, he said, it was necessary for Party committees and authorities at all levels and the whole political system to thoroughly grasp Hồ Chí Minh’s thought on great national solidarity and the National Unification Front. Favourable conditions should be created for people to develop their talents, creativeness and bring benefits to the country.

He said in the future, the VFF would listen to residents’ opinions and coordinate with local authorities in solving practical issues related to people’ lives. It would continue to play a key role in the implementation of the national patriotic emulation movement and participate more effectively in building a pure and strong Party and prevent corruption, negative phenomena and wastefulness.

While agreeing with the 13th National Congress’s political report, Đinh Tiến Dũng, Minister of Finance, said the ministry would focus on a number of measures to promote socio-economic development.

The measures include the synchronised implementation of pricing policies, state and corporate finance, auditing, administrative reform and applying achievements of the Fourth Industrial Revolution.

The priority would be on developing a modern collecting system, combining State Budget revenue restructuring in accordance with the level of development, integration and international practices.

The restructuring of State Budget spending would be promoted on the basis of clearly defining the roles and functions of the State and the market.

Another focus would be accomplishing the equitisation mechanism, divestment of state capital in enterprises, especially the issue of determining the value of land use rights and brands.

In addition, the administrative procedures would be intensified as well as inspections, auditing and the fight against corruption, wastefulness and practising thrift.

“The city effectively exploits the advantages of a special city, a big economic, cultural, educational, scientific and technological centre in the development of the knowledge economy,” he said.

It has set the foundations of the knowledge economy, including a large contingent of intellectuals, smart cities, high-tech parks, creative start-up centres and information technology on the 5G network.

The city has also issued policies to facilitate scientific and technological research which will aid daily life and accomplishing a start-up ecosystem, he said.

Thanks to the implementation of effective measures, the city has maintained its role as an economic engine for the country.

An overhead view of the meeting. — VNA/VNS Photo

To achieve the goal of developing a knowledge-based economy, Phong said that it is necessary to renovate mechanisms and policies, creating a new legal framework relevant to the development of the knowledge economy. It is a must build strategy for knowledge economy development in 2021 – 2030, with a vision to 2045.

A source of high-quality labourers will be developed along with improving people’s knowledge and training of talents.

It will be important to invest in developing information technology infrastructure, promoting the application and development of IT for the cause of industrialisation and modernisation.

Mechanisms and policies will be issued to perfect the start-up ecosystem, encourage, and promote businesses to invest in science, technology and innovation, Phong said.

The city will continue to renovate itself to ensure the leading role of the State in the economy as well as being active in international integration to take advantage of the external resources to serve the goal of modernisation of the country’s labour force. — VNS

Draft documents on Party building and national development debated at 13th Congress have 1211 words, post on vietnamnews.vn at January 27, 2021. This is cached page on VietNam Breaking News. If you want remove this page, please contact us.