India reported a big jump in new coronavirus infections on Thursday, driven by a resurgence in cases in some of its richest states.

The South Asian country recorded 35,871 new cases in the past 24 hours, taking its tally to 11.47 million infections, the third highest in the world after the United States and Brazil .

India recorded a peak of just under 100,000 new daily infections in September, before a gradual decline.

Infections fell to below 9,000 new cases in early February, but have steadily increased since then.

“We have to stop the emerging second peak of the pandemic through quick and decisive steps,” Prime Minister Narendra Modi told regional leaders on Wednesday during a virtual meeting to discuss the surge.

“In recent weeks, some 70 districts have witnessed a more than 150% increase in the number of cases and if we do not stop the pandemic right now, it could lead to a nationwide outbreak,” he pointed out.

The surge in infections has been led by Maharashtra, home to the financial capital Mumbai, as businesses reopened and millions used crowded public transport again.

“It does appear to be a second wave. That is not an incorrect description because the magnitude and speed of the rise in new cases is in fact comparable to the first wave,” Pradip Awate of the state surveillance office for Maharashtra, who is in charge of monitoring epidemic-prone diseases, was quoted as saying by The Indian Express newspaper.

The state of 112 million people ordered a new lockdown in some districts and put curbs on cinemas, hotels and restaurants until the end of the month after infections hit a multi-month high this week.

New cases have more than doubled in the past two weeks in the state’s industrial towns. And hospital beds and special COVID-19 facilities were reportedly filling up fast.

Cases have also risen this month in several other states including Punjab and Madhya Pradesh.

Crowding and reluctance to wear masks

Arvind Kumar, a chest and lung specialist, told DW that “this is nothing but a déjà vu phenomenon.”

“Because of smugness on the part of everybody, including the authorities, the pathogen has come back with force. COVID wards which were closed are now opening up again,” he said.

Several badly hit states have announced fresh restrictions such as curbs on movement and public gatherings in some cities and towns.

India: Pandemic forces children to drop out of school

Inter-state travel restrictions are also being enforced, with some state governments mandating RT-PCR tests for travelers from other states.

The central Madhya Pradesh state has ordered a seven-day quarantine for visitors from Maharashtra, while Punjab in the north extended a night curfew across nine districts and Gujarat, PM Modi’s home state, ordered a shutdown of schools and colleges across eight administrative divisions until April 10.

But major nationwide restrictions imposed during a monthslong lockdown last year have mostly been lifted.

Even mass religious gatherings are now allowed to go ahead.

Over three million mostly maskless pilgrims were estimated to have gathered on the banks of the Ganges river in the northern state of Uttarakhand last week as part of the Hindu religious festival, the Kumbh Mela. 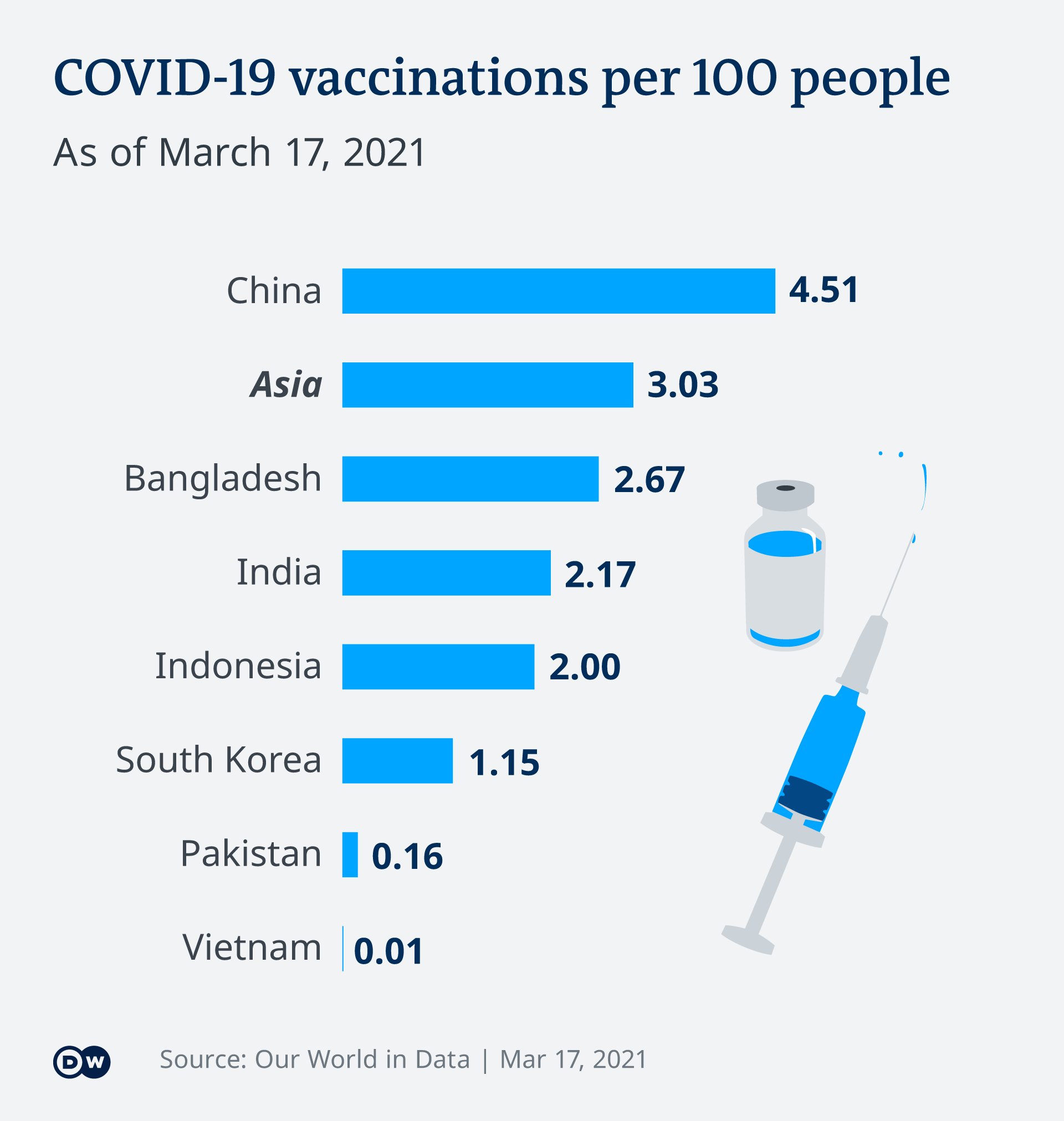 K Srinath Reddy of the Public Health Foundation of India told DW that there is cause for worry. “We are seeing a lot more opening up, a lot more commuting, a lot more superspreader events and new variants.”

To control the virus’ spread, PM Modi called for increased testing in small cities and towns as well as localized containment zones.

He also stressed the importance of vaccination .

The federal Health Ministry has so far distributed 75.4 million vaccine doses to states, of which some 36 million doses have so far been used. India is using the AstraZeneca shot and another developed domestically by Bharat Biotech. 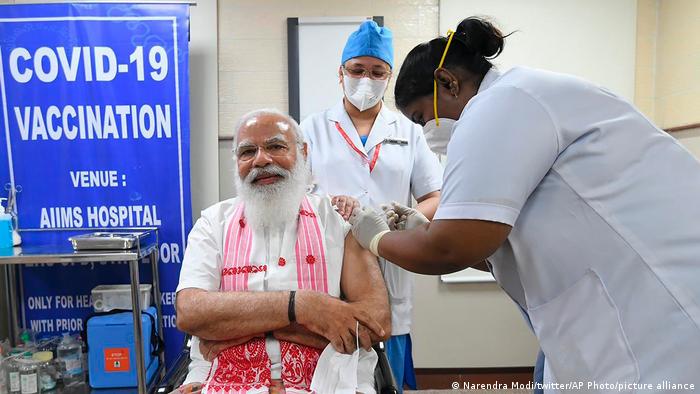 In this photo provided by the Indian PM’s twitter handle, Modi is seen getting a COVID vaccine shot

The current pace of inoculation is far from what’s needed to meet the government’s goal of vaccinating 300 million Indians, a quarter of the nation’s population, by August.

Health officials also pointed to another problem on Wednesday, saying that about 6.5% of vaccine doses in India are going to waste.

“The pace of vaccination in the country is continuously increasing,” he said. “But at the same time we have to take the problem of vaccine doses waste very seriously.”

Jacob John, one of the nation’s renowned virologists, told DW that the virus “knows no geographical boundaries.”

“It will continue to infect people who are susceptible and that is why I am stressing that vaccinating the population is a must. When you see a fire, you have to put it out,” he stressed.

Coronavirus: India's COVID surge triggers fears of new wave have 1587 words, post on www.dw.com at January 18, 2021. This is cached page on VietNam Breaking News. If you want remove this page, please contact us.