Renowned writer Nguyễn Quang Thiều held his first-ever solo art exhibition in Hà Nội last week, showcasing 53 of his paintings that he views as metaphors for Vietnamese people’s lives and the countryside.

The opening ceremony was more crowded than any other exhibition I’ve ever attended, with a host of artists, writers and businesspeople — all friends of Thiều’s — coming to enjoy the moment.

Most of the paintings had a red ribbon attached, meaning they have been purchased already. The attraction of his paintings, like his writings, can’t be denied.

Called “The Flute Player”, the exhibition is a collection of paintings in different materials, such as oil on canvas and watercolours. The largest one is 150cm by 180cm and the smallest 50cm by 70cm.

Thiều has long been known as a famous writer and poet and a talented painter and musician as well. He has taken part in various group exhibitions, and illustrated his own literary works and those of others. 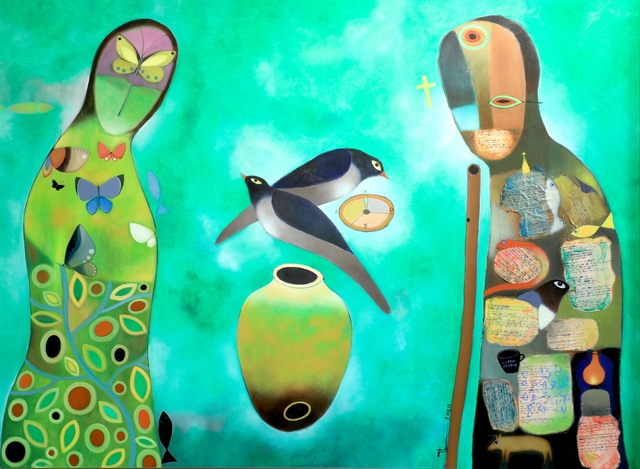 Inspired by a flute player

Thiều, who is the newly-elected president of the Việt Nam Writers’ Association, was born in 1957 and started drawing in 2005 but stopped soon after.

In 2012, encouraged by a flute player he happened to come across, he began to paint again.

He and his artist friends in Hà Nội’s Hà Đông District often meet at a coffee shop called the Old Paris Street Café in evenings and especially on weekend mornings.

Some years ago, he met a blind street musician, who stopped at the café and played the flute.

“When he finished playing, one of us gave him some cash,” Thiều recalled. “He looked our way and thanked us. When he turned to leave, I stood up to face him. I asked him to sit down and play his favourite tune for me. He looked my way, and at that moment I could see another pair of eyes within his blind eyes.”

The busker began to play the flute, and the tune hit Thiều as if it was the first time he had ever heard music. It felt like a gift from the universe. He was going through some problems back then, but that piece of music was like a blessing, from a man facing much more in the way of difficulties.

“Beauty can come from anywhere, at any time, as long as you have a heart and a mind to recognise it,” Thiều said.

The flute player became a metaphor for beauty in the world and for Thiều himself, as he has always loved playing the flute.

SKILLED HAND: Nguyễn Quang Thiều is known as a man of words but he’s also quite good at painting and playing the flute. Photo courtesy of himself.

Another language of poetry

Thiều has said he is not an artist but instead is someone heavily influenced by colour. Yellow, especially canola yellow, impresses him the most.

“I draw whatever my mind can conjure up,” he said. “Sometimes, when I’m not really sure what to draw, I read one of my poems. As I hear the words, a picture comes to mind, which my hand then draws.”

He believes that painting is “another language of poetry”, and many works of art have inspired him.

The bamboo flute is the main theme of his paintings at this exhibition. In one, a flute is drawn to size, while in another it is stretched out and bent like the trunk of a tree.

He has also drawn flutes curled up like snakes, and flutes hidden beneath lines of writing. It seems that through the image of a flute, poet-painter Thiều reveals his many thoughts and ideas. 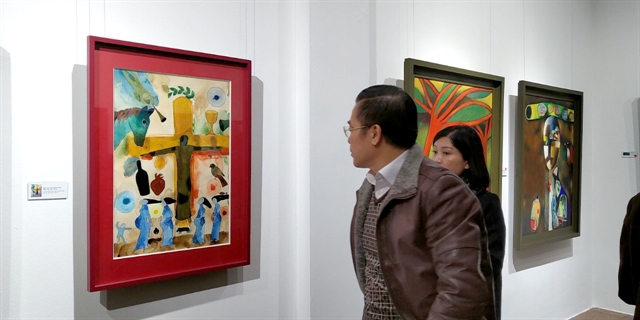 “The Flute Player” exhibition was curated by artist Lê Thiết Cương, who believes that “the freedom of drawing brings a touch of innocence to the poet’s artwork. His art is an interesting spiritual experience for the poet himself and for those who admire his work.”

Artist Chu Lượng said he was fascinated by Thiều’s paintings due to their harmonious colours and countryside inspiration.

“Thiều delicately weaves images of ceramic pots, poems, and birds into his paintings,” Lượng said. “It all reminds people of his homeland and philosophy.”

Explaining ceramic pots in his work, Thiều said: “We need three pots to shape a world, a culture, and a way to walk. One contains water, one is for seeds, and one is for characters.”

Regardless of the art form, Thiều sends a message of morality and humanity, as he once told me that “painting or writing, it’s just a language for me to say what’s on my mind, a place where I feel most comfortable and where I awaken in people an awareness of beauty”. VNS

COLOURS BRIGHT: The Tree of Life, oil on canvas.

Colours drive a poet to paint have 990 words, post on vietnamnews.vn at January 17, 2021. This is cached page on VietNam Breaking News. If you want remove this page, please contact us.