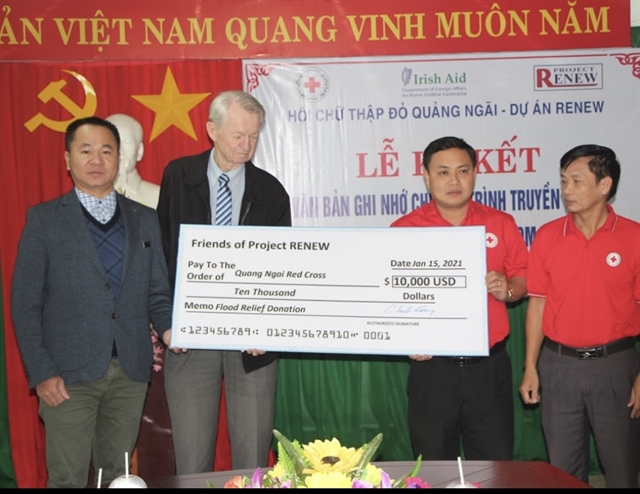 QUẢNG NGÃI — More than 110 Americans have donated more than US$28,000 so far in a charity campaign organised by Ronald L. Haeberle, whose photographs of the My Lai Massacre turned American public opinion against the war. He was assisted by Chuck Searcy who co-founded Project RENEW with Hoàng Nam in 2001.

They were aided by Ron Carver the curator of the exhibit Waging Peace in Việt Nam: US Soldiers and Veterans Who Opposed the War, now on exhibit at Vietnam’s War Remnants Museum in HCM City.

Up to $10,000 was for aid directly to the Red Cross for distribution to victims of the flooding disasters and damage caused by the typhoons in Quảng Ngãi, and more relief funds will be raised from others in the US. 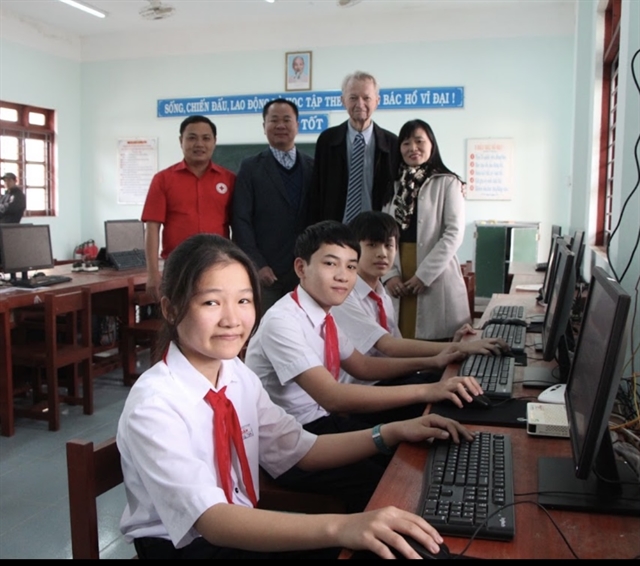 The donation to Võ Bẩm Secondary School as part of the flood relief to Quảng Ngãi consists of four desktop computers.

“We were moved by the images of mud slides, and water trapping villagers on the roofs of their houses and water roaring through village streets carrying away trees, furniture, animals and villagers themselves,” Haeberle said, explaining the motivation to begin the campaign. “I have been committed to doing all I can to help the people of Việt Nam ever since I personally witnessed American war crimes at My Lai.”

“I was horrified to learn that central Việt Nam was battered by six typhoons in three weeks,” stated Ron Carver. “When I received photos and videos from the War Remnants Museum, I knew I had to share these with the American people and seek donations to help with the recovery.”

“The Project RENEW staff have firsthand knowledge of victims of these typhoons and are in contact with these families,” Chuck Searcy stated. “People already struggling with the legacies of Agent Orange and injuries from wartime explosive accidents – years after the war ended – had a particularly hard time coping with the flood damage. We are fortunate that Project RENEW is in a position to help.”

Aid to those in Quang Tri province will be distributed beginning on January 25, while representatives of Project RENEW delivered a cheque to the Quảng Ngãi Red Cross on January 15. — VNS 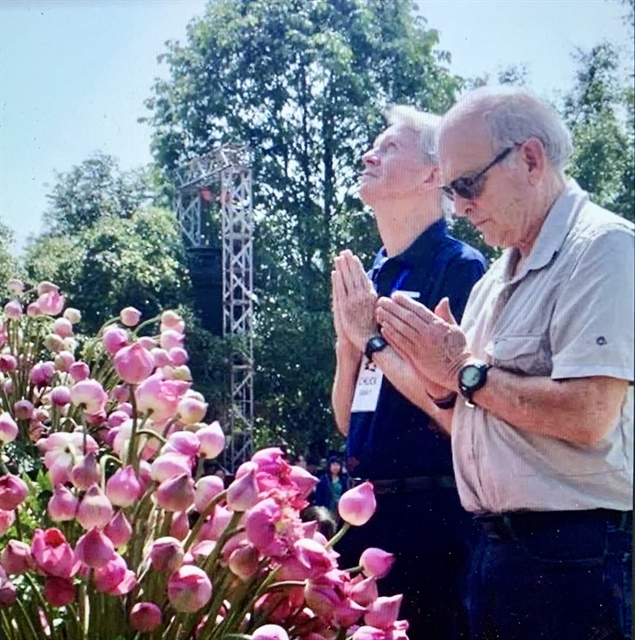 Chuck Searcy at the Son My Memorial Site on the 50th Anniversary of the My Lai Massacre. Photo courtesy Ron Carver; Co-editor with David Cortright and Barbara Doherty

In 1968, former US Army photographer Ronald L. Haeberle documented the tragic Mỹ Lai massacre on March 16, 1968, when 504 unarmed villagers – 182 women, and 173 children and infants – in the centre of now Tịnh Khê Commune, in Sơn Tịnh District, were killed by soldiers of Charlie Company, under the command of Lieutenant Calley.

Ronald was not known by local villagers until 2011 when he returned to the village to identify a person in a photo that he took that day. The photo was of a man sheltering his younger brother in a paddy field to avoid enemy gunfire.

The villagers knew him as the photographer behind the photos of the infamous massacre.

At the time, Ronald carried two cameras; one was assigned by the US Army with two rolls of black and white film, to follow the action. He returned these rolls of film to the commander of Charlie Company, but kept his own camera, with which he took 18 colour photos that were published in Life magazine, exposing the true story.

Ronald’s iconic black and white photographs become all the more visceral when displayed at the Mỹ Lai vestige museum.

The killings that occurred on March 16, 1968 prompted widespread outrage around the world. The incident is credited with advancing the end of the American War because of how it undermined public support for the war in the US.

American veterans deliver flood relief for Việt Nam have 852 words, post on vietnamnews.vn at January 22, 2021. This is cached page on VietNam Breaking News. If you want remove this page, please contact us.