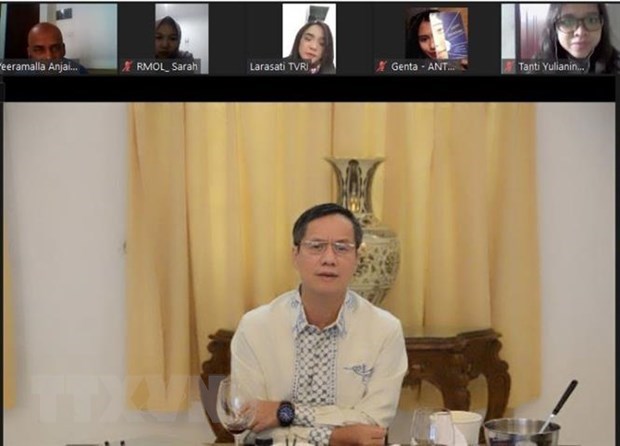 Jakarta (VNA) – Vietnam and Indonesia have always been trustworthy and loyal friends amid various political fluctuations in the region and the world during their 65 years of diplomatic relations, Vietnamese Ambassador to Indonesia Pham Vinh Quang told a meeting with local and international media agencies in Jakarta on December 22.

Reviewing the major milestones in diplomatic relations over the last 65 years, he noted the two sides established a strategic cooperative partnership in 2013 in all areas of politics, diplomacy, security, defence, economy, tourism, culture, and people-to-people exchange.

He affirmed that Vietnam and Indonesia share a firm cooperative foundation in politics and diplomacy, which was originally formed and developed by President Ho Chi Minh and President Sukarno.

The similarities in culture and history have helped them become closer, he said, adding that they share many common viewpoints at regional and international forums.

In 2020, the two countries strengthened their cooperation as non-permanent members of the UN Security Council and when Vietnam served as ASEAN Chair, he said.

He noted that two-way trade rose 60 percent over the past five years, from 5.6 billion USD in 2014 to 9.1 billion USD in 2019. Despite the impact of COVID-19, bilateral tourism and cultural cooperation and people-to-people exchanges all increased.

The number of Indonesian tourists to Vietnam increased 21.3 percent this year to 108,000, while more than 80,000 Vietnamese visited Indonesia.

In order to deal with COVID-19, Vietnam and Indonesia supported each other in their response. The Government, National Assembly, and businesses of Vietnam presented assistance to Indonesia, the ambassador said.

In multilateral frameworks, Vietnam, as ASEAN Chair in 2020, actively coordinated with Indonesia in holding the  Special ASEAN Summit and Special ASEAN Plus Three Summit, as well as special meetings at the ministerial level and related meetings seeking solutions to respond to the pandemic.

At the UN Security Council, he went on, the two sides worked together to speed up the approval of resolutions relating to cooperation in fighting the pandemic.

Throughout 2020, the Vietnamese Embassy in Jakarta has held a number of activities to mark the 65th anniversary of bilateral diplomatic relations, including a logo contest, an interactive dialogue on Indonesia's national radio station RRI, and a film screening on national TV channel TVRI, along with an online photo exhibition in Yogyakarta and Bali, the re-publishing of a book on the historic visit by President Ho Chi Minh to Indonesia in 1959, and a videoconference on tourism and investment opportunities in Vietnam and Indonesia amid the COVID-19 pandemic.

Vietnam, Indonesia maintain loyal friendship for 65 years: Ambassador have 612 words, post on en.vietnamplus.vn at December 22, 2020. This is cached page on VietNam Breaking News. If you want remove this page, please contact us.