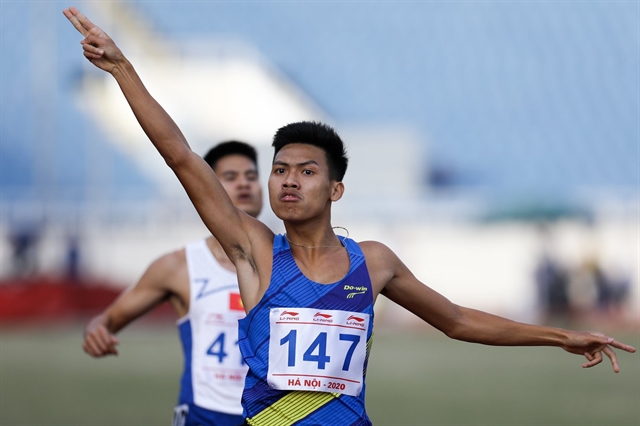 At the championship which concluded over the weekend, many athletes who have won the SEA Games gold medals like Dương Văn Thái and Nguyễn Thị Huyền were surpassed by their younger peers, showing there are young athletes ready to stake their claim for a place in the national team.

Twenty-year-old Trần Văn Đảng of Hà Nội was the most impressive new face at the event and twice defeated the defending SEA Games and national champion Dương Văn Thái of Nam Định.

Đảng’s performance indicates he will replace Thái to defend the titles in the 1,500m and 800m for Vietnamese athletics at the SEA Games.

In addition to his youth, Đảng is known for his determination in training and competition, as well as his ability to pick his spots in a race.

“Thái has good experience, but maybe this is about tactics. Young athletes always have to follow the senior players closely in order to learn and be able to overcome if senior athletes make mistakes,” said Dương Đức Thủy, head of athletics section of the National Sports Administration.

The women’s 400m events this year received a lot of attention for the competition between Nguyễn Thị Huyền, the 30th SEA Games champion, and Quách Thị Lan.

Lan was injured in 2019 but recorded an impressive performance in this important tournament. Lan beat Huyền twice in the 400m with a time of 52:46secs and 400m hurdles with a time of 55:95 secs.

Lan’s victory was even more meaningful because this was the first time she surpassed her senior player at a major tournament.

“Lan’s performance would have been better if her mentality was stable because she trained very well. Lan often has a psychology problem when she faces Huyền because Lan almost never defeats Huyền. Only recently, Huyền was sick, so Lan won, but her results were not good. In big international tournaments, Lan has never been able to beat Huyền,” said athletics coach Nguyễn Thị Bắc.

“However, I think after this tournament, Lan will be more confident,” Bắc added.

Experts were also impressed with 17-year-old talent Phùng Thị Huệ, who took a bronze medal in the women’s 100m with a time of 11.78 seconds.

According to Thủy, Huệ surpassed many seniors such as Lê Thị Mộng Tuyền and Oanh to prove her ability. 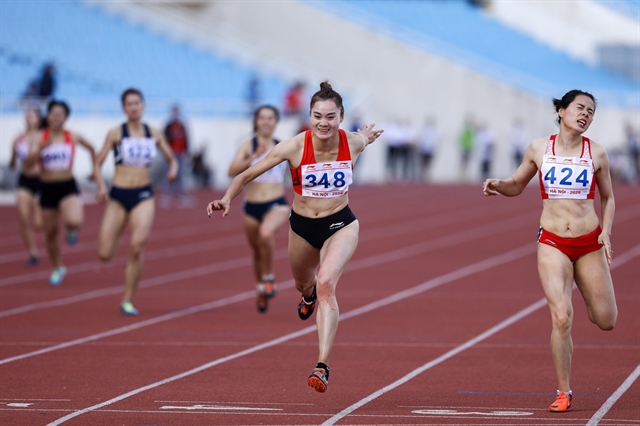 However, Nghĩa’s times were still considerably behind his regional competitors.

“We have a record in the men’s 100m in the national event, but to gain the SEA Games gold medal in this division is still a challenge for the trainers themselves as well as Vietnamese athletes, including Nghĩa,” said Thủy.

The goal at the 31st SEA Games for the Vietnamese athletics team is to maintain the first place with 17-19 gold medals.

According to Thủy, if that goal is to be achieved, young athletes will need to step up.

As well as the SEA Games at home, Vietnamese athletes are aiming to win tickets to the Tokyo Olympics next year. The 4x400m mixed relay team (Quách Thị Lan, Trần Nhật Hoàng, Nguyễn Thị Hằng and Trần Đình Sơn) has a great opportunity as the best 16 teams in the world will qualify.

“Vietnamese athletics hopes it will get a ticket to Tokyo in the 4x400m mixed relay event as the team are in the top 16 of the world, however, the team will have to try their best in the next events to improve their result,” said Nguyễn Mạnh Hùng, general secretary of the Việt Nam Athletics Federation.

According to Hùng, in addition to the 4x400m mixed relay team, runner Lan also has the opportunity to win a ticket to Tokyo as she ranks top of Asia and 19th in the world in the 400m hurdles. However, the athletes will have to work harder because the Olympic standards will be changed when they are based on the number of points on the rankings. — VNS

Vietnamese athletes eye SEA Games and Olympics have 960 words, post on vietnamnews.vn at November 16, 2020. This is cached page on VietNam Breaking News. If you want remove this page, please contact us.