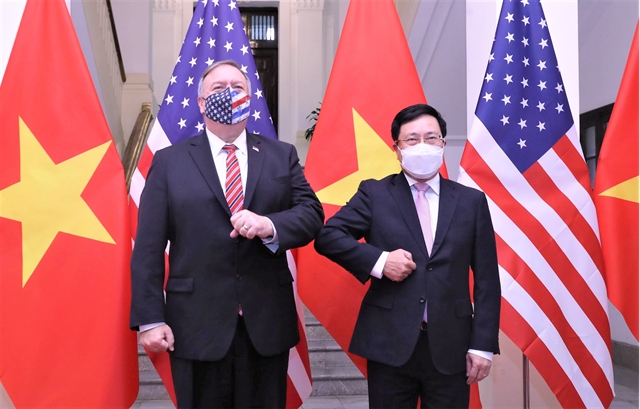 HÀ NỘI — US Secretary of State Mike Pompeo on Friday reaffirmed the US support for a strong, prosperous, and independent Việt Nam with an increasingly expanded role in the region.

He was speaking during the talks with Vietnamese Deputy Prime Minister and Minister of Foreign Minister Phạm Bình Minh in Hà Nội, as part of his five-day Asia tour, as the two countries marked 25 years of diplomatic relations in 2020.

The US diplomat pledged to maintain stable cooperation with Việt Nam to elevate bilateral ties in practicality, confidence, effectiveness, and sustainability, making positive contributions to regional and global security, peace, cooperation, and development.

During the talks, Vietnamese foreign minister Minh praised the flexibility with which the two countries have conducted activities – including exchanges between the high-level leaders – to commemorate the 25th anniversary of diplomacy amid challenges caused by the COVID-19 pandemic.

Foreign minister Minh thanked the US Government for delivering timely and practical support for Việt Nam in the fight against COVID-19 and the recent floods in central Việt Nam, including the two million dollars in aid from the US Agency for International Development (USAID).

Minh affirmed that Việt Nam attached great importance to its comprehensive partnership with the US, expressed his pleasure at the positive and comprehensive development of the bilateral relationship in areas from politics and diplomacy, economy and trade, security and defence, to people-to-people exchanges.

The US Secretary of State highly valued the deepening of comprehensive partnerships on the basis of respect towards each other’s independence, sovereignty, territorial integrity, and political system. 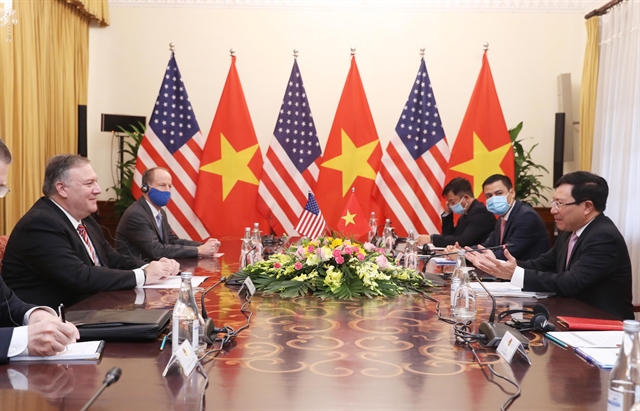 The two sides also exchanged views on measures to further advance relations between the two countries in the future, with priority given to expediting the resumption of regular delegation exchanges, especially at high levels, strengthening humanitarian cooperation and addressing the consequences of the war, contributing to the building up of trust between the two countries and continuing to facilitate the bolstering of bilateral trade and investment relations in the spirit of mutual benefits.

Vietnamese foreign minister Minh welcomed the two sides’ effective work towards a “sustainable and harmonious” trade balance, stressing the potentials of the energy sector in the bilateral ties.

He reaffirmed the Vietnamese Government’s commitment to creating a conducive investment and business environment for US enterprises to operate “successfully and for long” in Việt Nam.

Pompeo expressed his pleasure at the measures that Việt Nam had carried out towards trade balance, the multiple important economic deals between the two countries, and pledged support for the two countries’ efforts at dialogues and consultation to build a sustainably growing commerce relationship.

Regarding regional issues of mutual concern, Deputy PM Minh requested support from the US for ASEAN centrality and solidarity, elevate the strategic partnership between the US and ASEAN.

Pompeo said Việt Nam had performed admirably as the chair of ASEAN this year as well as its non-permanent seat on the United Nations Security Council for the 2020-21 term and expressed the wish for the two sides to continue to boost coordination in handling common challenges, to contribute to the maintenance of the peace, stability, security and development on regional and global level.

Việt Nam is one of the US’ fastest growing markets and the US is one of Việt Nam’s largest economic partners, with bilateral trade reaching $81 billion. — VNS

US committed to support a strong, prosperous, and independent Việt Nam: Pompeo have 739 words, post on vietnamnews.vn at October 30, 2020. This is cached page on VietNam Breaking News. If you want remove this page, please contact us.