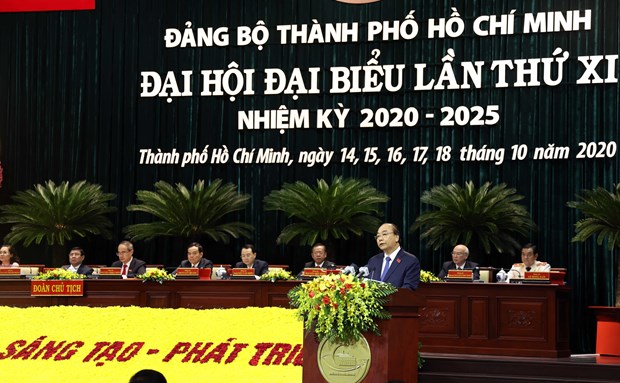 HCM City (VNA) – Ho Chi Minh City must work to sustain its role as Vietnam's economic locomotive, driving growth in the surrounding area and the country as a whole based on its creative implementation of Party and State policies, Prime Minister Nguyen Xuan Phuc has said.

He made the comments during a speech at the 11th Congress of the HCM City Party Organisation for the 2020-2025 tenure, which officially opened on October 15 and gathered together 444 delegates.

The Government leader spoke highly of the city's achievements in the 2016-2019 tenure, noting it grew quickly and healthily, posting impressive numbers at each turn.

The southern economic hub grew 7.2 percent on average every year during the previous tenure, contributing approximately 22 percent and 27 percent to national GDP and the State budget, respectively. Its agricultural production has been modernised to post productivity three-times higher than the national average, while its new-style rural building programme has been basically completed.

It also took the lead in building a smart city, especially in health, education, and transport management.

The PM went on to emphasise a number of shortcomings facing the city, including problematic infrastructure and complex security issues in some areas. Local economic growth is yet to be on par with potential and the city's special position, while human resources quality is still to meet requirements for development and international integration.

Phuc asked local authorities to effectively establish and implement planning for the city in the 2021-2030 period with a vision to 2050, focusing on consolidating its central role in development within the HCM City urban area, the southern region, the Central Highlands region, and the Mekong Delta.

He urged the city to tackle bottlenecks hindering improvements in traffic infrastructure, human resources, administrative reform, and the business climate.

HCM City should be the pioneer in addressing the development challenges facing Vietnam and in creating breakthrough policies to effectively mobilising and allocating resources, he said.

He also highlighted the importance of building an efficient, democratic, modern, and active administrative environment and reinforcing defence-security, external relations, and international integration.

The PM asked the city to focus on personnel tasks during the congress to elect an effective apparatus serving its future missions./.

PM urges HCM City to maintain its status as Vietnam’s economic engine have 570 words, post on en.vietnamplus.vn at October 15, 2020. This is cached page on VietNam Breaking News. If you want remove this page, please contact us.