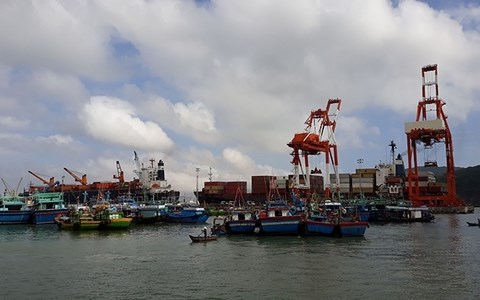 HCM City (VNS/VNA) – The construction of a series of seaport s in the south-central region is expected to drive its maritime economic development , according to local government leaders.

One of the two former wharves would be completed by the end of 2022 and the other in October 2025.

The smaller wharf was scheduled to be completed in August 2026.

“The port will help merchandise exports, contribute to attracting investment and serve the needs of production and processing projects in industrial parks and industrial clusters in Ninh Thuan province and the south-central and Tay Nguyen (Central Highlands) regions," Vinh said.

"It will play an important role in supporting the transport of equipment for renewable energy projects such as wind and solar power projects in the province."

Neighbouring Binh Thuan province plans to build the Son My international port in the commune of the same name in Ham Tan district.

It will have a specialised wharf for liquefied natural gas (LNG) that can handle ships of up to 100,000DWT, an international passenger wharf that can berth ships of up to 225,000 GRT and a general berth capable of handling ships of up to 50,000 DWT.

Binh Thuan province also plans to build a specialised LNG port with a capacity of up to 170,000 DWT in Tan Thanh commune, Ham Thuan Nam district, to serve the gas-fired power plant in Mui Ke Ga.

Among the south-central provinces, Khanh Hoa has the largest number of ports: 16.

Meanwhile, Bac Van Phong Port is under construction in Dam Mon, Van Ninh district. One wharf that can handle ships of to 50,000 DWT has been completed.

Mai Dinh Vu, Chairman of Van Phong Port Company Limited, said though the port had yet to be completed, it had already received many foreign ships. With a rising number of cargo vessels of 50,000-70,000DWT registering to enter the port his company was seeking to increase the capacity of the remaining two wharves to improve the port's efficiency.

According to the Ministry of Transport, the south-central region will have five key ports.

Seaports to foster south-central region economic development have 596 words, post on en.vietnamplus.vn at September 14, 2020. This is cached page on VietNam Breaking News. If you want remove this page, please contact us.