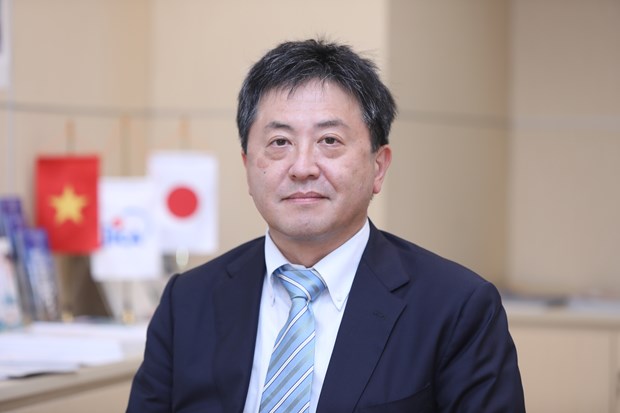 The Japan International Cooperation Agency (JICA) is proud to be part of Việt Nam’s socio-economic development progress, said Chief Representative of JICA in Vietnam Shimizu Akira in an exclusive interview with the Vietnam News Agency (VNA).

What are your assessments of Việt Nam’s achievements in economic development since JICA restarted ODA operations in Việt Nam in 1992?

Việt Nam’s economic success is an inspiring development story. Let’s look at some figures over the period: GDP has been more than 20 times bigger and GDP per capita has been almost 20 times higher. From an embargoed economy, Việt Nam has opened up and now has a trade value at two times of GDP, and become one of the most open economies in the world. During the process, tens of millions of people have escaped poverty and thrived for prosperity and better opportunities in their lives.

I think the figures speak so much about the energy, dynamics and potentials of your country: the young and skillful labour force, the dynamic enterprises and the more improved business and investment climate that your Government has been trying to provide. It is very impressive that at present, Việt Nam is doing very well in preventing COVID-19 while keeping the economy going. And JICA is very proud to contribute a part in the process.

The World Bank recognised Viet Nam as one of the most successful emerging economies, what do you think about this assessment?

I agree with the assessment. As the World Bank assessed, one of the key factors of Việt Nam’s economic success was its transition from a centrally planned to a market economy.

Besides this, from my personal viewpoint, I think it owes much to the potential of Vietnamese people, such as a hard working and flexible mind. Their attitude while respecting history, also looking forward to make positive history with other countries are also key factors.

JICA has been cooperating with Việt Nam in a variety of fields aiming at its smooth transition to a market economy, and providing technical assistance tailored to the stage of economic development for decades. For example, JICA supported various institutional reforms in accordance with policy frameworks under policy-based loans of the Poverty Reduction Support Credit (PRSC) and following Economic Management and Competitiveness Credit (EMCC), both of which are syndicated loans with the World Bank. We highly evaluate outstanding achievements backed by Việt Nam’s continuous efforts under these policy frameworks.

You said JICA is proud to contribute in the progress of Việt Nam’s development. Could you please tell us more about this? And what are JICA’s evaluations on Vietnamese policies in regard to ODA?

We have been working closely with the Government in various projects and programmes for bringing in higher living standards and more economic opportunities for all Vietnamese people.

The operation of JICA aims at improvement of both hard and soft socio-economic infrastructures. We work with various Vietnamese agencies for capacity development of the officials, efficient and effective state governance, better delivery of public services, improvement of human resources, etc. In addition, we provide financing for various important infrastructure projects in transport, energy, urban development and agriculture. Many Japanese ODA projects have served as catalyst factors for inviting private investment. At present, Việt Nam is among the top five largest recipients of Japanese ODA in the world.

One thing I would like to emphasise here, that JICA cannot successfully implement all the projects and programmes without the cooperation and trust of our Vietnamese counterpart agencies. In this regard, I believe that the ODA policies have functioned well in terms of creating an enabling and facilitating environment for ODA attraction and use. However, I think Việt Nam can do better, further streamline administrative procedures to avoid project delay (which is quite common), and narrow the gap between domestic regulations and good international practices in procurement, contract management, taxation issues and so on. These efforts not only promote better use of ODA but also development of the market economy in which private sector will ultimately benefit, which leads to further promotion of Foreign Direct Investment.

In general, please highlight JICA’s achievements in Việt Nam over the past years?

In recent years, Japan’s ODA share over the total ODA to Việt Nam exceeds 30 percent and Việt Nam has been one of the biggest recipient countries of Japan’s ODA in comparison to the rest of the world. In five years between 2014 and 2018, the total amount of loans, technical cooperation and grant aid has accumulated up to 5,324 billion JPY, 40 billion JPY and 73 hundred million JPY, respectively.

The first pillar is Promotion of Economic Growth and Strengthening International Competitiveness, which aims to support to improve the market economy system. JICA’s support to Viet Nam under this pillar in recent years continues to focus on financial reforms and state-owned enterprises reforms, infrastructure development (road, bridges, urban transport) as well as to strengthen industrial competitiveness and human resource development. Some out of the numerous projects effectively being implemented under this Pillar are: the Hồ Chí Minh City Urban Railway Construction Project (Line 1), which will be the first underground metro system currently under construction; the Lạch Huyện Port Infrastructure Construction Project, which was the first PPP collaboration using Yen Loan opened in 2018; and the Vietnam-Japan University (VJU), which is a joint creation of both countries and opened in 2016 in Hà Nội. Recently, we positioned agriculture as the key issue in this pillar as well, as we are all aware that Việt Nam is a major agricultural country.

The second pillar, response to fragility, supports to address emerging issues caused by rapid urbanisation, natural disasters and climate change and to develop the systems in the fields of healthcare and social security. JICA has been providing cooperation for adaptation and mitigation measures for climate change in addition to support in policy formulation and enforcement, supporting HCM City and Hà Nội with water environment improvement for flood damage prevention; helping Bến Tre Province with water management to protect agriculture from salinity intrusion during dry season.

In terms of healthcare and social security, for a long time, we have been closely collaborating with top institutes and hospitals such as the National Institute of Hygiene and Epidemiology (NIHE), Bạch Mai, Chợ Rẫy and Huế Central hospital, which contributed in controlling the COVID-19 pandemic. Moreover, projects such as vaccine production facilities of POLYVAC or insurance provider payment methods and basic health services have helped Việt Nam address the pending issues in healthcare and social security.

Under “Good Governance” – the 3rd pillar, JICA continues to provide training to government officials, to support developing training curriculums and texts for legal professionals (judges, prosecutors and lawyers), to promote e-Government and to strengthen the capacity of the Office of the National Assembly of Việt Nam. These interventions have helped to strengthen governance, enhancing capacity of improving and executing the legal system, ensure justice, fairness, neutrality and transparency of the governance.

JICA’s focus in transparency is not only in the governance sector, but also in the economic sector. Supporting in legislation and fair practices in competition law, human resources development in the security sector, and strengthening corporate governance will help to lead investment from foreign countries.

The global economy is currently facing challenges due to the COVID-19 pandemic. In that context, Việt Nam and Japan are both significantly affected. Please advise if JICA will adopt new forms of cooperation in order to adapt to the current “new normal” state?

As I said above, in the context of COVID-19 spreading, society has slightly changed all over the world. JICA is going along with the same policy of the government of Viet Nam in order to adapt to the current “new normal” state.

Based on three pillars’ cooperation, JICA is implementing projects to prevent infectious diseases in the health sector and to promote economic growth by helping the Vietnamese Government to enhance public investment, in order to stimulate the country’s private sector.

We also started reviewing the outcomes of some of the on-going and completed projects, in which the influence of COVID-19 was not a pre-requisite, so that we can be able to acquire the same results under the COVID-19 situation. — VNS

JICA proud to be part of Việt Nam’s development progress: Chief Representative have 1533 words, post on vietnamnews.vn at September 2, 2020. This is cached page on VietNam Breaking News. If you want remove this page, please contact us.