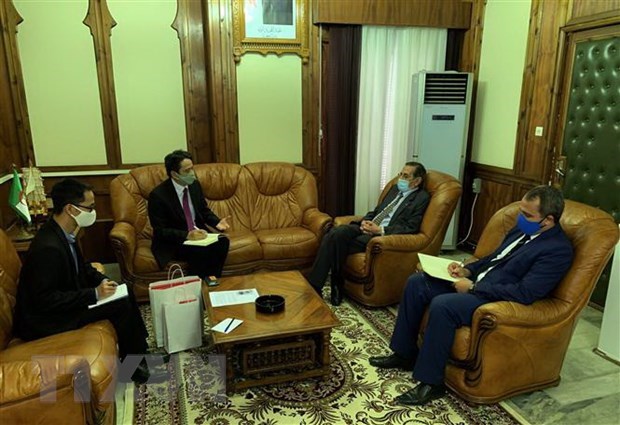 
Algiers (VNA) – Vietnamese Ambassador to Algeria Nguyen Thanh Vinh had a working session on July 14 with Abdelmajid Chikhi, advisor to the Algerian President and Director General of the National Archives Centre, to discuss how to intensify cooperation in archiving information between the two countries.

At the meeting, Vinh appreciated collaboration between the Algerian centre with Vietnamese partners, especially with the Vietnamese Embassy in organising activities in celebration of the 55th anniversary of bilateral diplomatic ties (October 28, 1962-2017).

He expressed his hope that both sides maintain their close cooperation in order to contribute to the two countries' relations.

Abdelmajid Chikhi said he hopes for tighter collaboration with the Vietnamese Embassy as well as the State Records and Archives Department of Vietnam to soon sign a collaboration agreement between the two archives agencies.

Algeria wants to learn from Vietnam's experience in management over national memory records, he said, adding that his agency is willing to support the Vietnamese Embassy in searching information related Emperor Ham Nghi – the eighth Emperor of Vietnam 's Nguyen Dynasty (1082-1945) – during his exile in the African nation./.

Vietnam steps up cooperation with Algeria in information archiving have 322 words, post on en.vietnamplus.vn at July 15, 2020. This is cached page on VietNam Breaking News. If you want remove this page, please contact us.