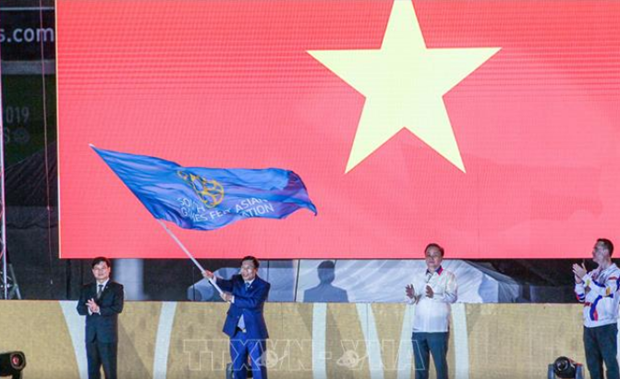 Minister of Culture, Sports and Tourism Nguyen Ngoc Thien takes the flag that marks Vietnam as the host of SEA Games 31 (Photo: VNA)

Hanoi (VNA) – The host Vietnam will hold an online conference with regional countries on July 21 and 22 to announce the list of sports at the 31st Southeast Asian Games (SEA Games 31) and the 11th Southeast Asian Para Games ( Para Games 11 ), which are scheduled for 2021.

To date, a master plan for the organisation of the two tournaments has basically been completed, while various contests have been held to select the official song, logo and mascot for SEA Games 31 .

SEA Games 31 is slated for late November or early December 2021, followed by Para Games 11 in late December. The events are expected to attract the participation of 11 countries in Southeast Asia.

SEA Games 31 will feature 36 sports, two-thirds of which will be those on the official sport lists of the Olympic Games and the Asian Games (ASIAD).

Countries in the region can also propose some other sports for competition. Hanoi and some neighbouring localities will provide the venues for the competitions.

Meanwhile, Para Games 11 is set to have 14 sports, and the capital city will also be its host./.

Official sports of SEA Games 31, Para Games 11 to be announced in July have 315 words, post on en.vietnamplus.vn at July 16, 2020. This is cached page on VietNam Breaking News. If you want remove this page, please contact us.