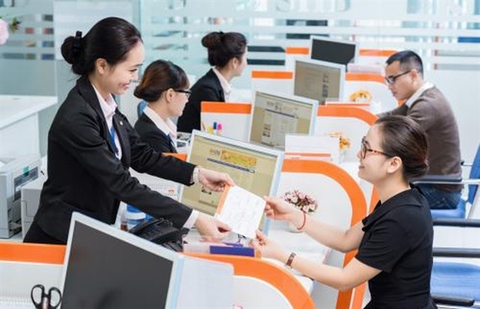 Credit growth is expected to improve significantly thanks to many proactive measures taken by the Government and central bank recently to revive the economy. — Photo cafef.vn

Experts have forecast bank credit growth in the second quarter to reach 3.5-4 per cent, much higher than the rate in the first quarter.

In the first three months the rates had been 0.1 per cent, 0.07 per cent and 1.1 per cent as the Covid-19 pandemic severely impacted various industries and their demand for funds.

The State Bank of Viet Nam (SBV) said in the first quarter many businesses increased repayment of existing debts while not borrowing afresh.

Experts say the situation has been improving in the second quarter with demand from credit from businesses and individuals showing signs of increasing.

In Ha Noi, total loans outstanding at credit institutions in May were estimated at VND2.163 trillion (US$94 million), representing a 2.4 per cent increase for the year.

Credit growth is expected to improve significantly thanks to many proactive measures taken by the Government and central bank recently to revive the economy.

Fitch Solutions experts forecast a further 50 basis point cut that would take the refinancing rate down to 4 per cent and discount rate to 2.5 per cent by the end of this year.

The cuts are likely to have a strong impact on the economy by encouraging banks to reduce their lending interest rates and boost demand for credit, experts say.

Besides, low deposit interest rates, especially for the short term, has helped and will help banks reduce their cost of funds further, giving a further fillip to lending interest rate cuts.

The Government recently gave a five-month extension for payment of taxes and land use fees for businesses hit by the pandemic, which come to an estimated VND180 trillion, benefiting 98 per cent of firms in the country.

All these measures are expected to help increase the credit demand.

The Government's policy of identifying public investment as the engine for economic growth, which has stalled due to the pandemic, has placed the focus on speeding up disbursement of public investment.

While other investment sources have slowed down, increasing public investment, planned at nearly VND700 trillion this year, should be useful in accelerating post-pandemic economic growth, thus creating more employment and increasing credit demand.

VPB for instance has crossed 12 per cent while it has a full-year quota of 13 per cent.

Its CEO said the bank had turned its lending focus to customers less affected by the pandemic since the beginning of this year.

TPBank announced at its annual general meeting recently that its credit growth by the end of April was 11 per cent, meaning it had only 0.5 per cent left.

It is expected to ask the central bank to increase its limit to 15 per cent this year.

HDBank's loans outstanding at the end of the first quarter were worth VND162.06 trillion ($6.9 billion), up 5.92 per cent for the year, much higher than the industry average. It reported steady growth across all segments like individual customers, small and medium-sized enterprises and consumer loans.

Experts have warned that if these banks' credit quotas for the year are not increased, they, the business sector and indeed the entire economy would face trouble.

Though exports are hit by the pandemic, the demand for investment and production of goods in the country remains high, meaning the demand for credit is still significant.

This year's credit growth is likely to reach 9-10 per cent, lower than the central bank's 11-14 per cent target, but any change is possible, they added.

The Covid-19 pandemic has hit global trade hard, but some of Viet Nam's exports have escaped its worst effects, which has helped keep the Vietnamese dong-US dollar exchange rate steady.

In the first five months of the year Viet Nam's biggest export earners were processed and manufactured goods, of which 17 generated at least US$1 billion each.

Electronics, computers and accessories accounted for US$15.3 billion, a year-on-year increase of 22.1 per cent. Exports of machinery, equipment, components, and tools reached $8.5 billion, a 25 per cent rise.

According to the General Statistics Office, Viet Nam's total trade in the first five months was worth $196.8 billion, a decrease of 2.8 per cent against the same period last year.

It enjoyed a surplus of $1.9 billion.

This means there has been a substantial inflow of foreign currency, stabilising the exchange rate.

Since the end of last year the dollar rate at banks has appreciated by only VND92, or 0.24 per cent.

Speaking about the influence of the yuan on the dong, experts said the depreciation of the Chinese currency has only had a marginal effect so far.

The confrontation between the US and China has shown no signs of ending, which could further depreciate the yuan, but the Chinese Government does not seem to have plans to sharply devalue the currency.

The country is also running a balance of payments surplus, which gives it a further cushion.

The dong is expected to escape volatility caused by external factors through this year. — VNS

Bank lending expected to get out off coronavirus doldrums soon have 1116 words, post on bizhub.vn at June 22, 2020. This is cached page on VietNam Breaking News. If you want remove this page, please contact us.