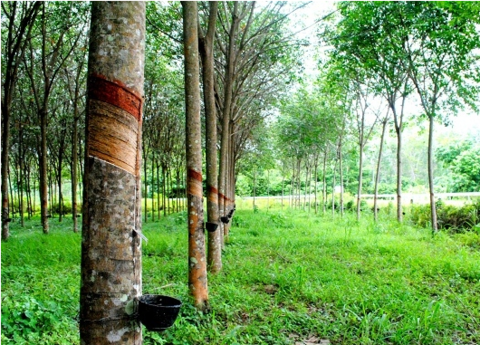 Thousands of hectares of rubber land were planned to be converted into industrial land. — Photo tinnhanhchungkhoan.vn

There is a rising wave of converting rubber plantations into industrial land as developers eye spots for industrial zones to capture opportunities from global value chains.

Converting plantations into industrial land could be the answer for rubber companies facing falling rubber prices.

With large areas in Binh Duong, Dong Nai and Tay Ninh, rubber plantations had high potential for merger and acquisition (M&A) deals to turn them into industrial zones.

At the annual shareholders’ meeting in 2019, Phuoc Hoa also said that it would transfer 691ha to Viet Nam Singapore Industrial Park Company Ltd. (VSIP) to develop VSIP No 3.

Dong Nai Rubber Corporation recently asked the provincial People’s Committee’s permission for the conversion of land use purpose of 18,000 out of 37,000ha of rubber land the company was currently managing.

Under the company’s proposal, 5,000ha of land would be used to develop industrial zones and clusters in Thong Nhat, Long Khanh, Cam My and Long Thanh districts. The rest would be used for developing high-tech agriculture and urban areas.

Mirae Asset Securities Viet Nam in a recent report estimated that more than 7,000ha of rubber land was planned to be converted into industrial land.

Investing in industrial zone development had become one of the major business lines of Viet Nam Rubber Group (VRG) which manages around 400,000ha of rubber land. As of September 2019, VRG invested in 12 companies which operated 16 industrial zones with a total area of more than 6,566ha.

According to BIDV Securities Company, the industrial property market would see significant growth from next year with the momentum gained from free trade agreements (FTAs), especially the European Union – Viet Nam FTA (EVFTA) – the trade deal with commitments about improving institutions and business climate which would make Viet Nam more attractive to investors.

In addition, the COVID-19 pandemic was accelerating the transformation of global value chains, during which Viet Nam could emerge as a centre for investment inflow.

Of note, Viet Nam was accelerating disbursement of public investment with a focus on infrastructure, which would benefit industrial parks in the long term.

A report by property service firm JLL Viet Nam showed that demand for industrial land remained high in the first months of this year despite the impacts of the COVID-19 pandemic.

Average leasing prices were up by 6.5 per cent against the same period last year to US$99 per sq.m in the northern region and by 12.2 per cent in the southern region to $101 per sq.m.

Experts, however, said that it was necessary to have a plan for converting rubber land into industrial parks to improve land use efficiency.

The Ministry of Planning and Investment’s statistics showed that there were 335 industrial parks with a total area of 96,500ha in Viet Nam as of November 2019. Of them, 256 were in operation with an occupancy rate of 75 per cent. — VNS

Rubber plantations converted into industrial land have 656 words, post on bizhub.vn at May 18, 2020. This is cached page on VietNam Breaking News. If you want remove this page, please contact us.