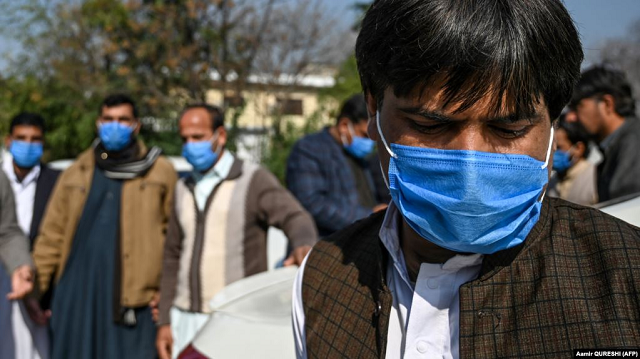 KARACHI / ISLAMABAD / QUETTA / PESHAWAR / LAHORE / GILGIT / MUZAFFARABAD:  The novel coronavirus emerged in the central China city of Wuhan towards the end of last year and proliferated to almost the whole world within a couple of months. It’s not the virulence or fatality, but the infectivity of the new virus – also known as SARS-CoV-2 – that has set off a global frenzy.

The Covid-19 respiratory illness caused by this mysterious contagion has so far infected more than 2 million people in 202 countries and territories of the world – more than 128,000 of them have died and counting.

The virus has claimed 117 lives while at least 1,645 coronavirus patients have recovered.

The number of cases has continued to soar despite the country being under lockdown for the third consecutive week.

The situation remains fluid and we’re updating stats as soon as new figures are officially released.

Follow The Express Tribune’s live coverage of the pandemic here.

The Punjab government has announced a ban on pillion riding, exempting elderly persons, women and law enforcing agencies, with immediate effect until April 25.

The virus has claimed 124 lives and at least 1,645 patients have recovered.

In the last 24 hours, there have been over 520 new cases in the country and 17 reported deaths.

8:45 am: Priority of K-P govt to help traders run businesses

Khyber-Pakhtunkhwa Health Minister Taimur Khan Jhagra said it was a priority of the government to find a way for traders to run their businesses.

Jhagra had a marathon session with representatives of K-P traders at the K-P secretariat. He thanked traders for working with the government, adding that the country cannot afford unrest at a time like this.

1. Had a marathon session with representatives of KP traders at the KP secretariat. It was important to listen to them at length because we feel their pain. Everyone in the country and most of the world is going through a difficult time as never experienced before in our lives. pic.twitter.com/7gUJY4mMyY

8:35 am: Partnership between govt, society

Khyber-Pakhtunkhwa Health Minister Taimur Khan Jhagra said a partnership between the government and society is essential at this crucial time.

He said although the lockdown has given the country extra time and prevented faster infection rates, the people will have to live like this until a vaccine is developed.

6. This serves to show that while the national lockdown has given us some time and has prevented faster infection rates, we need to be prepared to live with Corona until a vaccine is found. This will require a partnership between govt. and society like never before. pic.twitter.com/eSJnjeysBC

In the last 24 hours, four patients succumbed to the virus, raising the provincial tally of deaths to 42.

At least 191 patients have recovered from the virus, he added.

The minister expressed concern for Peshawar and said new cases emerge in the city every day. The total number of cases in Peshawar stands at 235.

Peshawar has the third-highest number of confirmed cases – after Karachi and Lahore, he added.

The number of cases in Mardan has also slowed down.

Will discuss in detail later today with Advisor Information @ajmalkwazir.

I congratulate all healthcare professionals, across all affiliations, for the excellent work they are doing.https://t.co/d0PItexjlK

LIVE: New cases in Punjab, Islamabad; nationwide tally soars past 6,500 have 852 words, post on tribune.com.pk at April 16, 2020. This is cached page on VietNam Breaking News. If you want remove this page, please contact us.