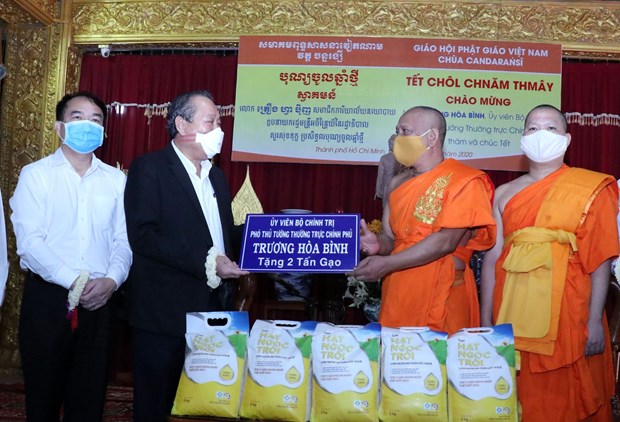 Wishing Khmer Buddhists and people happiness and safety, he affirmed that the Party and State always respect and ensure the freedom of religion or belief in line with law of religious followers, including Khmer Theravada Buddhists.

They have also assisted people of different ethnic groups, including Khmer, to stabilise their lives, preserve and bring into play cultural identities, and develop economic activities so as to join hands in building a wealthy and strong country, he noted.

On behalf of the Government, Deputy PM Binh thanked Theravada Buddhists and Khmer people for helping the Party, Government and people nationwide to achieve initial encouraging outcomes in the COVID-19 combat.

He also asked them to keep seriously complying with the PM's Directive 19 on anti-pandemic measures in the new context to prevent virus transmission, minimise losses, and ensure stability in socio-economic development and people's lives.

Appreciating Party and State leaders' attention to Theravada Buddhists and people of the Khmer ethnic group, Most Venerable Danh Lung, member of the Vietnam Buddhist Sangha's Executive Council and head of Candaransi Pagoda, spoke highly of the Government's sound policies and timely measures in the COVID-19 prevention and control, which have helped Vietnam become a role model in this work.

He said this year, Theravada Buddhists and Khmer people have celebrated the traditional New Year festival in a merry atmosphere but still adhered to anti-pandemic regulations.

Monks and followers at Candaransi Pagoda will continue instructing others to comply with the PM's Directive 19 and take part in patriotic emulation movements to contribute to national development, he added.

Deputy PM congratulates Khmer people on traditional New Year festival have 500 words, post on en.vietnamplus.vn at April 26, 2020. This is cached page on VietNam Breaking News. If you want remove this page, please contact us.