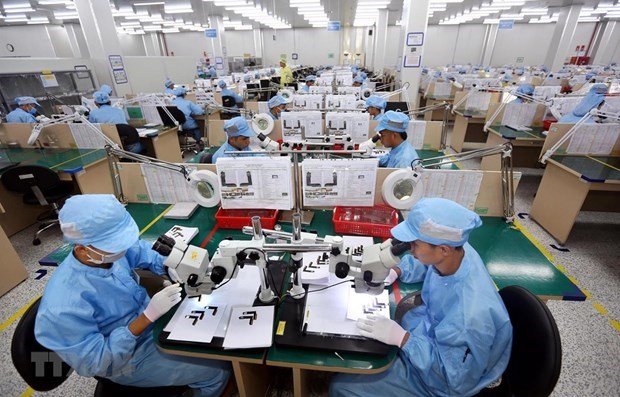 Hanoi (VNA) – Some large electronics manufacturers in Vietnam are feeling the punch from the COVID-19 outbreak as material imports and finished product exports have been affected by tighter border control aimed at preventing the disease from spreading.

According to the Industry Agency under the Ministry of Industry and Trade, electrical and electronic products, including mobile phones and televisions, have the biggest turnover among commodities Vietnam trades with China and the Republic of Korea (RoK), where COVID-19 is raging.

Therefore, border control measures taken to prevent the disease will influence the import of materials and the export of finished electronic products, the agency said.

Samsung Electronics Vietnam, a large company invested by the RoK, said border control may affect the production of several new strategic models since some components and spare parts for manufacturing have to be imported from China, mainly via border gates in northern Lang Son province.

Although Lang Son authorities are working to speed up customs clearance for a batch of component imports at the request of Samsung, its material supplies from China in the time ahead are forecast to be affected since the neighbouring country plans to shut down its border gates. This will subsequently make Samsung unable to import components by road, the firm said.

Samsung Electronics Vietnam added import by air or sea is currently under consideration, but it will be more difficult than via road since it is costlier and hard to supply enough materials for production in a timely manner.

Recently, Samsung has still imported components from the RoK as usual. However, this country has also reported a COVID-10 outbreak over the last few days.

The company predicted more difficulties for its production inputs if the RoK Government applies export-import control measures to prevent the disease.

Electronics manufacturers and associations in Vietnam are proposing the Government directly negotiate with central and local authorities of China about border control and disease prevention measures so as to ensure material supplies. They also called for financial support for companies in this sector to overcome difficulties.

Director of the agency Truong Thanh Hoai said his office will help businesses seek other material sources and increase trade promotion activities in search of new export markets, especially those taking part in the free trade agreements that Vietnam is also a member like the Comprehensive and Progressive Agreement for Trans-Pacific Partnership (CPTPP) and the EU-Vietnam Free Trade Agreement (EVFTA).

For the long term, the Ministry of Industry and Trade has suggested many solutions to address existing shortcomings to the Government, including developing supporting industries and those producing important materials, he added./.

Electronics producers face material shortage amid COVID-19 outbreak have 532 words, post on en.vietnamplus.vn at February 26, 2020. This is cached page on VietNam Breaking News. If you want remove this page, please contact us.