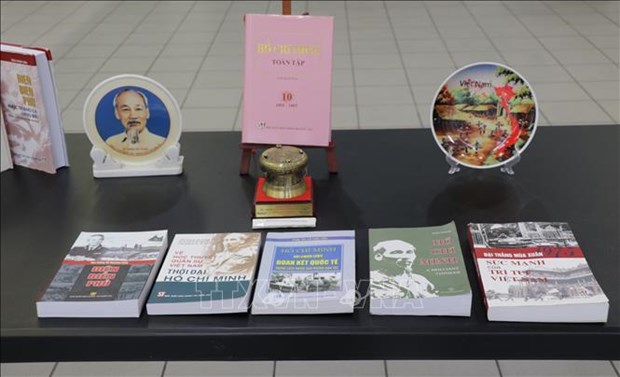 Books featuring late President Ho Chi Minh, the founder of the Communist Party of Vietnam, are displayed at the workshop. (Photo: VNA)

Vietnam’s increasing prestige and position in the international arena demonstrate the political strength and ideology of the CPV, as well as its ingenious ability to seek ways to deal with the current complicated international situation, he said.

That Vietnam became a non-permanent member of the United Nations Security Council for 2020-2021 with an almost absolute number of votes has proved the trust of the international community in the CPV, he added.

Louis Lang, a representative from the Communist Party of Canada, said the workshop, themed “Communist Party of Vietnam: 90 years of accomplishments and international solidarity,” created an opportunity to learn about the role of the CPV in the modern society and the gathering of people to solve social matters.

Participants at the workshop expressed their impression and admiration when seeing documents highlighting the glorious milestones of the Vietnamese nation such as the birth of the CPV, the successful August Revolution 1945, and the Dien Bien Phu Victory in 1954.

Portraits of late President Ho Chi Minh by Canadian artists Jean-Maurice Gélinas and Guy Lapierre were put on display at the event.

Works featuring the Great Spring Victory of 1975 and the Dien Bien Phu Victory in 1954 were also showcased to help Canadian friends understand better about the leadership role of the CPV in the cause of national liberation, reunification, building and defence./.

Canadian friends appreciate Vietnam communist party’s leadership have 394 words, post on en.vietnamplus.vn at February 2, 2020. This is cached page on VietNam Breaking News. If you want remove this page, please contact us.